Trust The Magic Of New Beginnings 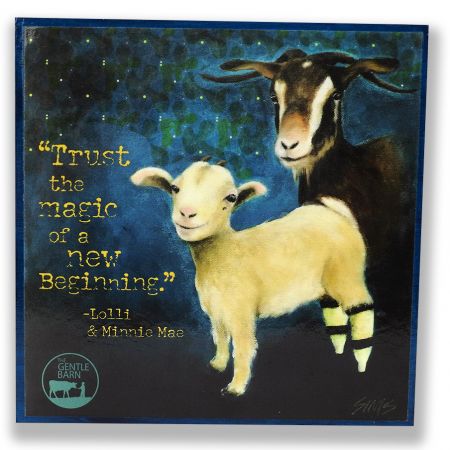 Painting available in our store.

2020 has been a doozie and I think we are all rattled. Many of us are facing new beginnings, be it financial, new jobs or lost jobs, health issues, new relationships, or a move to a new living situation. Many of us are left scared, isolated, alone, and afraid. But this kind of uncertainty can only bring new beginnings! Change is difficult, but at the end of it, we always find ourselves with new opportunities, and when we embrace them, great things happen. Lolli in Tennessee, Holy Cow in California, and Jemima Puddle Duck in Missouri are no strangers to change. Each of them has been through very hard times, been lonely, and frightened. And once through it, they all ended up with new beginnings that proved to be better than they could have ever imagined.

Lolli was born in the dead of winter and because of freezing temperatures, lost both her back legs to frostbite. She dragged herself around for months until a concerned neighbor brought her to our attention and we were able to help her get to the hospital for surgery, and then The Gentle Barn for healing and new wheels. Lolli suffered for sure, but now she plays with her mom and dad all day, receives so much love from our caregivers, and gives hope and inspiration to all who meet her. The bright smile on her face lights up our Nashville location and hasn’t a trace of the struggle she went through before coming to us.

Named by Ellen DeGeneres, Holy Cow was born in a dairy, taken away from her mom at a day old, and stomped so she could not walk. At eight weeks old she was sent to slaughter where she was so sick that we were called to take her off their hands along with another calf that Ellen and Portia named Madonna. Holy could not walk at all and our veterinarians wanted to euthanize her. But instead, I called Dr. Michael Rubin who had never worked on a calf before but was willing. He used chiropractic to straighten her spine, we lifted her up to build muscle, and several months later Holy Cow was walking! Today Holy is nine years old and spends her time nurturing others in her herd. She assisted Rosita in raising her son Eugene, adopted Sage and Oliver as her own boys, and was by Charlie’s side when his mom passed away and helped him grieve. Now Holy is desperately trying to lick our calf John Lewis and I don’t think she’ll give up until she can bathe him every day. Holy Cow might have been sick, injured, alone, and afraid when she came to us, but she sure has a loving family now!

Jemima Puddleduck was raised in a bathtub. We are not sure what happened, but her sibling died, and Jemima was given to us. Without a mom, or family, shy of us at first, she grew in confidence until she became a fan favorite of The Gentle Barn. She splashes in water bowls, dines on her favorite snack, blueberries every day, and even flirts with our tom turkey, Peyton Manning. Even though she is are only duck, she is friends with everyone and feels right at home. Jemima had to go through upheaval to get to us, but her life turned out better than expected!

The transition takes effort, even the miracle of birth involves labor pains. So, when I look at the chaos of today, I absolutely know that something beautiful is coming for each of us! We are being called to learn, grow, reevaluate, reprioritize, and rethink our lives. We are being asked to slow down, get centered, and connect to ourselves and each other in a new and deeper way. We are being probed to be more compassionate and thoughtful. And we are being led to see the world differently. Something great is coming!