Posted on Jun 08, 2020  | Tags: Lance the Horse, Andrew the Horse, Victory the Calf
By Ellie Laks, Founder of The Gentle Barn 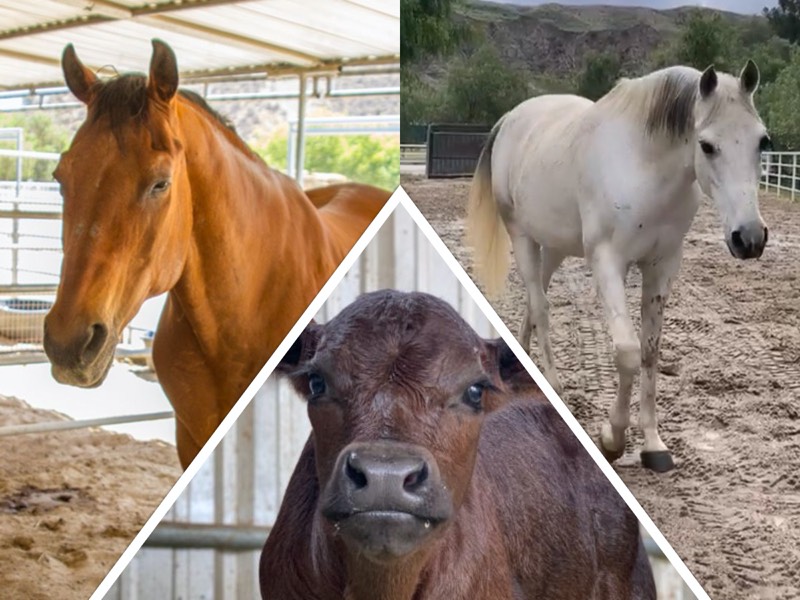 This week we said farewell to three of our family members: Our horses Andrew and Sir Lancelot, and our newly rescued calf, Victory. Each with remarkable stories of courage, generosity, and brilliance.

Andrew was kept as a stud horse for twenty-five years. When he was no longer of use, they left him in a ravine to die. He was a walking skeleton when animal control found him and was brought back to the shelter to be euthanized. Just before he was about to be put down, the shelter volunteer called me and asked if we could take him in. We said yes, he was gelded, and we went to get him a week later. He seemed so depressed and ashamed when we met him for the first time. His head was hung low to the ground, he wasn’t eating even though he was emaciated, and he didn’t even look at us when we began talking to him. But when I introduced myself and described The Gentle Barn and the life he could have, his ears perked up and he raised his head to meet my gaze. I promised him a life of leisure where he would always get great food, clean water, gentle hands, a forever home, and a loving family. By the time I was done telling him all about it, he looked at me and said, “let’s go!”

While we were walking Andrew to the trailer, he all of a sudden stopped and started thrusting his nose over and over again in the same direction. At first, I thought he might have something in his eyes or ears but soon realized that he was pointing at another horse. I asked the volunteer about the other horses and she said that Patric was to be euthanized in an hour. That he was found in a different ravine and had nowhere to go. I looked back at Andrew and said, “Yes, we can take him too!” The two horses were loaded onto the trailer and brought home to The Gentle Barn. They were both grossly underweight, scared of people, and so sad. But with time, treatments, and lots of love, they both recovered and became the best of friends. Andrew saved Patric’s life!
Andrew lived at The Gentle Barn for eight years, till he was thirty-three. His last night here he was healthy and happy, ate bedtime cookies, and got his usual kiss goodnight. But early the next morning we found him in excruciating pain, rolling on the ground, covered in sweat, biting at his sides: the usual signs of extreme colic. We raced him to the hospital immediately but by the time we got there too much of his intestines had died off and given his age, the veterinarian said that there was no way he would make it through surgery. Andrew was relieved to exit his body, away from the pain.

Sir Lancelot was originally a racehorse, and when they were done with him he was sold at auction to people who treated him like a car and not a living being. He was ridden too often, too fast, and too long. His body broke down and they almost rode him to death. Luckily, he was confiscated by the Los Angeles Police Department and the people were brought to justice. Because he was already so old, lame, and terrified of humans, he was scheduled to be euthanized at Animal Control. When the police officer who saved him learned that he was to be put down, she called us and asked us to save him.

We rehabilitated Lance with acupuncture, massage therapy, laser therapy, chiropractic care, ice therapy, hand walking, high-calorie grain and hay, and lots of love to help him gain trust and show him that he is safe. When his body was finally a perfect weight and his eyes were shining with new life, we introduced him to our other horses. Lance had never been able to be out in the pasture with other horses before. He made friends, played, had long slow conversations, and even fell in love with another horse, Princess. The two of them were inseparable and he loved protecting her and staying by her side in the shade at nap time.

When Lance's bride, Princess passed away, Lance grieved for a while and then volunteered to become a seeing-eye horse for our blind horse, Hero. He went out to pasture with her every day and gently led her around, making sure she knew where the water and shade were. He stood by her side in the barn keeping her company and eating alongside her. He was so good to her.

Sadly, the racing industry is very hard on thoroughbred’s legs as they are trained at two years old before their legs are even developed. Later in life, it is very common for thoroughbreds to have lameness issues. Lance had 10 great years being healthy, strong, and vibrant, but as he aged, his old issues started creeping back in. He became lame in the front, and we fixed it. He became lame in the back and we fixed it. But then he became lame again in the hind end and stopped eating. That's when we knew he was ready to transcend a body that miraculously made it to thirty-six years old. Unheard of for a thoroughbred!

Lance passed away with his family gathered around him, while we thanked him for his courage and generosity not only to Hiroka (aka Hero) but to all of the horses and people who were lucky enough to know him. He was an amazing healer and ambassador, giving all of him to all of us. It was an honor and privilege to love him and we will carry him in our hearts forever!

Little Girl, who I affectionately referred to as Victory, was born in a slaughterhouse. On hard concrete, she was too cold at night, and with no shelter, she overheated and became dehydrated during the day. Her mom was young and inexperienced, and with all the terror and chaos around her, she did not know how to bond or nurse her baby enough. Without sufficient colostrum, Victory was sick by the time she arrived at The Gentle Barn a few days later. She had an infection in her gut which passed to her joints making it hard to walk. She later developed an E. coli and staph infection in her lungs making it hard to breathe. Her health and temperature went up and down, responding to the meds but never completely healing, until she finally was struggling so hard to breathe that we helped her transition out of her body to peace. But on her good days, Victory ran and played, bonking my knees with her head, and nibbling on my clothes and hands. We spooned and cuddled for hours each day, often intertwined with legs and arms wrapped around each other. And she jumped, bucked, and played for hours. She had the brightest eyes I have ever seen. She had fawn-like ears, a puppy dog nose, and the legs of a ballerina. And the love that she extolled to me, her mom, her cousin, and auntie, took our breath away.

These are such difficult and unsure times with the worldwide pandemic and the anger and suffering of racism in our country. There seems to be hurt everywhere. But through hurt, comes change. Through struggle, comes growth. And through the uproar, comes peace. Even the miracle of birth comes with labor and pain. I believe that there is a huge shift in consciousness coming for all of us worldwide. I believe that we are called to be better people and show better humanity. I think we are being called to connect with each other through these common experiences that will, in the end, unite us together in a deeper more profound way. There is a lot of violence, fear, and hurt that we can focus on, but I have been trying to focus on the gifts instead. Yes, we have much to overcome still, but look at all the masses who are outraged and standing up for justice?! People are protesting across our country. Millions are acknowledging that your fight is our fight, your pain is our pain, injustice somewhere is injustice everywhere. I am so proud of us right now!

Lance gave of himself to Hero, Andrew saved Patric’s life, and our tiny calf spared her mom from slaughter. They were a very bright light in a dark world. Whether they lived till their thirties or just three weeks, they were huge gifts! And so are we all. Each and every one of us has the capacity to stand up for justice, be the voice for the innocent, and give to others around us. We can be more inclusive, and more tolerant. We can be more generous and gentle. And I am taking a good look at myself in the mirror tonight and am going to figure out how I can give more, love more, and care more. Because at the end of the day, it starts with us! Andrew, Lance, and Victory gave as much as they possibly could, and in their memory, I’d like to do the same, so I can be a gift as well.