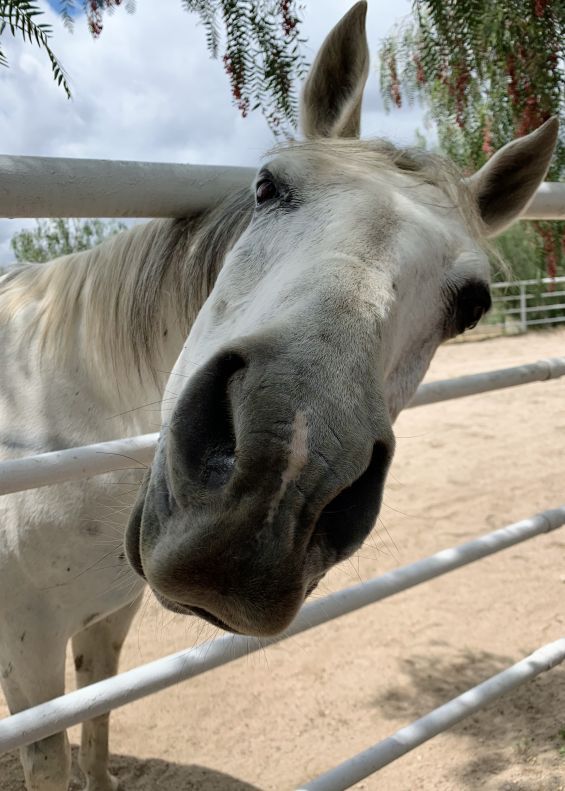 Andrew was used as a stud horse for twenty five years. Kept in a twelve by twelve stall and treated aggressively, he lived with loneliness and sadness. When the people were done using him, they left him in a ravine to die. He was found by animal control hundreds of pounds underweight, scared, and full of fear. He was brought to the animal shelter and scheduled to be euthanized. But moments before the veterinarian was going to inject him with euthanol, the volunteer holding him called us and asked if we would take him. When we went to pick him up, his head was on the ground, jung in shame, with nothing to live for. We introduced ourselves, described The Gentle Barn and the life he would have with us, and invited him onto our trailer. Just before he loaded, he stopped and started pointing with his head over and over again towards another horse. When we asked the volunteer why, she said that the other horse was scheduled to be euthanized in the next hour. We loaded both horses onto our trailer and brought them home to The Gentle Barn to live a good life.

Andrew and Patric were inseparable and lived at The Gentle Barn for several years, when Patric passed away of old age and mobility issues. Andrew then became best friends with our horse Magic. And the two of them would gallop around the pasture, tails in the wind and mains flowing. Andrew, once so scared of humans, grew to love affection, bedtime cookies, going for walks, and eating carrots from guests' hands. He had the very best life and flourished.

One morning early, we found Andrew in tremendous pain, rolling on the ground with colic. Colic is a stomach ache in horses but it is extremely painful and it can be fatal. We hooked up the truck and trailer immediately and drove him to the hospital. But by the time we got there the ultrasound showed that much of his intestines had died off, making his prognosis very poor. With his age of 33, and the suffering he was feeling, the veterinarian advised us to help him out of his body.
Andrew felt so grateful for the life he got to enjoy at The Gentle Barn for the last several years. He got to have a family and friends, great food and water, and have a huge purpose teaching people kindness to animals. He felt special and loved, and left peacefully taking the gratitude with him. Andrew will forever be our pegasis and will race around in our hearts forever.