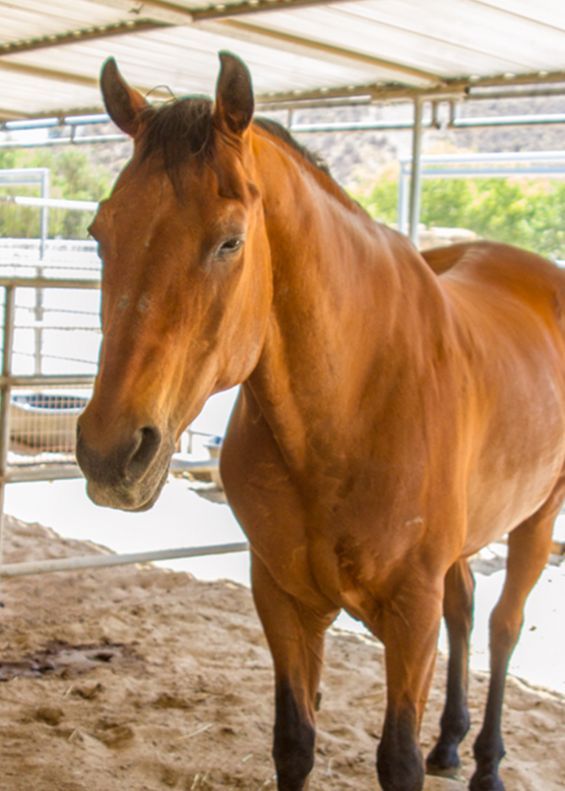 Sir Lancelot was originally a racehorse, and when they were done with him he was sold at auction to people who treated him like a car and not a living being. He was ridden too often, too fast, and too long. His body broke down and they almost rode him to death. Luckily he was confiscated by the Los Angeles Police Department and the people were brought to justice. Because he was already so old, lame, and terrified of humans, he was scheduled to be euthanized at Animal Control. When the police officer who saved him learned that he was to be put down, she called us and asked us to save him.
For an entire year we rehabilitated Lance with acupuncture, massage therapy, laser therapy, chiropractic care, ice therapy, hand walking, high calorie grain and hay, and lots of time in the hands of our staff to gain his trust and show him that he is safe. When his body was finally a perfect weight and his eyes were shining with new life, we introduced him to our other horses. Lance had never been able to be out in pasture with other horses before. He made friends, played, had long slow conversations, and even fell in love with our horse princess. The two of them were inseparable and he loved protecting her and staying by her side in the shade at nap time.
When Lance's bride, Princess passed away, Lance grieved for quite a while and then became a seeing eye horse for our blind horse, Hero. He went out to pasture with her every day and gently led her around, making sure she knew where the water and shade were. He was so good with her.
Sadly the racing industry is very hard on thourough bred's legs as they are trained at two years old, before their legs are even developed. Later in life it is very common for thoroughbreds to have lameness issues. Lance had 10 great years being healthy, strong, and vibrant, but as he aged, his old issues started creeping back in. He became lame in the front, and we fixed it. He became lame in the back and we fixed it. But then he became lame again in the hind end and stopped eating. That's when we knew he was ready to transcend a body that miraculously made it to thirty six years old. Unheard of for a thoroughbred!
Lance passed away with his family gathered around him, while we thanked him for his courage and generosity not only to Hero, but to all of the horses and people who were lucky enough to know him. He was an amazing healer and ambassador, giving all of him to all of us. It was an honor and privilege to love him and we will carry him in our hearts forever!