Posted on Mar 11, 2021  | Tags: Stanley the Sheep, Miles the Cow, Rosie the Pig
By Ellie Laks, Founder of The Gentle Barn 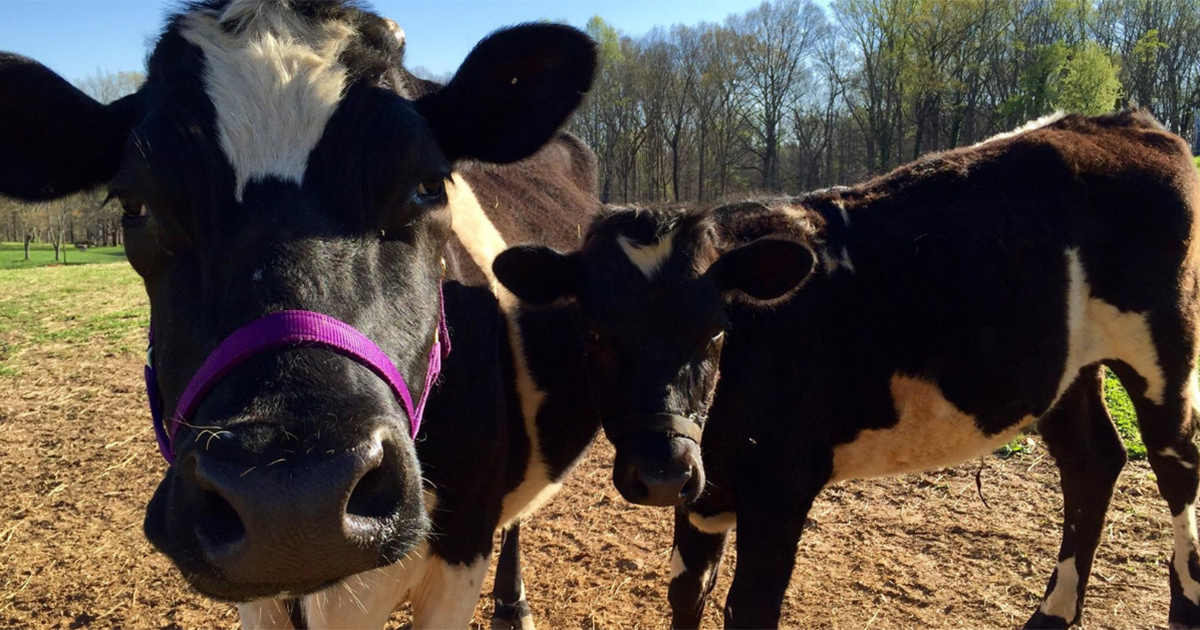 Animals bond, love, and grieve just like we do, and the loss of a mom for an infant is just as jarring and scarring for animals as for any human. Whether animals come into The Gentle Barn with physical, emotional, or mental challenges, we do whatever it takes to make them whole and breathe life back into them. Stanley, Miles, and Rosie all lost mothers but found family at The Gentle Barn.

Stanley was born a twin at an agricultural school. Sadly, the school was keeping the mom to breed again and the brother to use as a stud but had no use for Stanley. When the students found out that Stanley was going to be sent to auction, they asked us to intervene. We pleaded with the college to keep Stanley a bit longer so he could nurse and wean slowly, even offering to pay his board, but they refused. We begged to have the entire family, but they declined our offers. When we took Stanley home, we knew we were saving him, but he saw us as his abductors taking him from his family. Stanley was inconsolable and we quickly realized that having our staff and volunteers with him gave him no comfort. We had an older sheep at the time named Josh who we rescued with his mom years ago. Josh was very kind and nurturing. I asked Josh if he would be willing to go into quarantine with Stanley and befriend him, and he generously said yes. Josh spent thirty days inside the barn with Stanley, eating beside him, resting next to him, and telling Stanley of the wonderful life awaiting him. Once quarantine was over, Josh escorted Stanley out to the barnyard, introduced him to the other animals, and made sure everyone was hospitable and loving to Stanley. Because of Josh’s compassion, Stanley grew and blossomed in our barnyard, making all of us his friends, and establishing The Gentle Barn as his home. Stanley is now ten years old, huge and handsome, and the object of all the lady sheep’s crushes. It was excruciating for Stanley to lose his mom and brother, but he has long ago made peace with his journey, set down his past, and embraced his Gentle Barn California family with gratitude and appreciation.

Miles was born to a dairy cow, where he was taken away from his mom at a very young age so his breast milk could be consumed by humans. Thank goodness it was a small family farm, and he was kept where he could at least see his mom. When we were allowed to save his mom, Maybelle, we were not told of Miles. It was only when Maybelle kept continuously crying that we realized there must be a hidden baby. Jay went back to the farm, found Miles, negotiated his release, and brought him home to his anxiously awaiting mom. Their reunion was breathtaking as they called to each other while he was in the trailer and ran to each other once inside the pasture. Miles and his momma Maybelle have been inseparable ever since. I would think that early trauma would have affected Miles, but he is gentle, kind, thoughtful, and loving to everyone who has the pleasure to know him. Miles was one of the very lucky ones to be reunited with his mom and have her support and affections for the rest of his life, but most are not so fortunate. Miles now lives this life, loves his mom, and enjoys our gentle hands in Nashville on behalf of the millions who are not so lucky.

Rosie was born on a pig farm and in a terrible storm was swept away in a flood. Thankfully she was washed up on the shores of a horse farm and taken in by the people who lived there. They cared for Rosie, raised and loved her. Pig mommies are strict disciplinarians and make sure their piglets grow up humble and well behaved. When any baby is raised with no boundaries or discipline, they start testing and getting more and more aggressive when not stopped. By the time Rosie was a year old, she was biting and bullying her people. Her family threatened to send her to slaughter if they could not find someone to take her. Through Esther’s Army, they found us, and we offered to bring her into The Gentle Barn. Rosie was also not spayed and for a week out of each month, we were dealing with PMS with teeth, not fun! Once acclimated to our staff at The Gentle Barn, we got Rosie spayed. Once her hormones were balanced, we started training Rosie to soften, approach us with humility, and relax knowing we would take care of her. Rosie is now a very good, sweet, affectionate girl who loves to roll over for tummy rubs and enjoys people’s company. She has allowed us to officially become her parents and family, accepting our strength and leadership, as well as our love and affection.

There are far too many animals being taken away from their mommies and families. In the “real” world most animals don’t get to fall in love, raise their babies, or even become full grown. They are sent to slaughter with eyes still baby blue, a mouth full of baby teeth, yearning for their mommies the whole time. We are thankful to have been able to save Stanley in California, Miles in Tennessee, and Rosie in Missouri and give them the lives and the love that all animals deserve. When you support The Gentle Barn and sponsor one of our animals, you enable us to save more babies, tell more stories, and open more hearts to the magic of all animals. And when you go vegan, you help fewer animals suffer, and more lives lived to their fullest potentials. Thank you for helping us so that all beings may find love, family, and peace!

We have chosen to work with The Gentle Barn over the years because we have been able to personally see how much love, care and dedication Ellie and Jay’s team give to their mission. I really feel like they are kindred spirits, and I am always so proud to be a part of anything they do. It is rare for people to have an opportunity to look a cow in the eyes, give it a hug and see that this is a sentient being. It is meaningful work. --Brook Harvey-Taylor