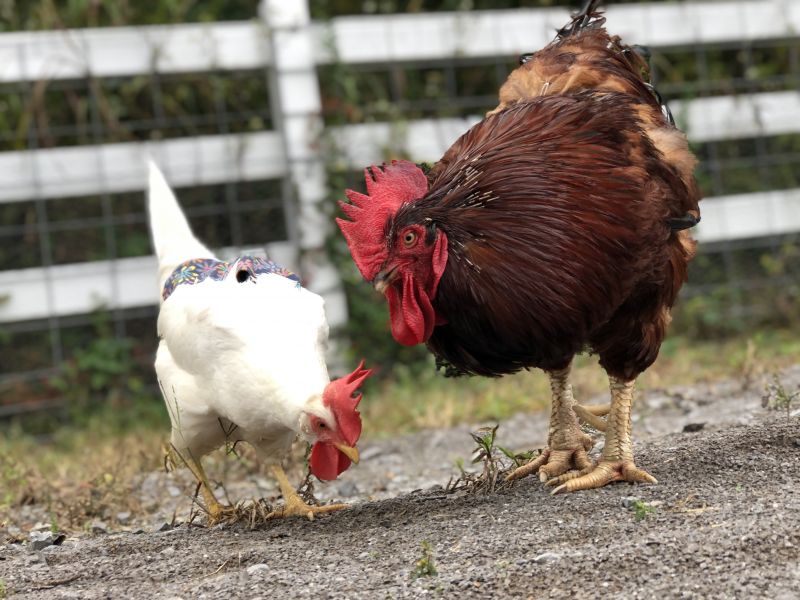 Rosey was originally thought to be a female, but when he was a little older and started to crow, we realized that she was a he. But we already had a rooster and being a patriarchal society, multiple roosters typically do not get along. Once Rosey hit sexual maturity and became a threat to our head rooster, Rick Springfield's way of life, they started fighting. Rosey spent most of his days trying to stay away from Rick. When their fights turned from immature scuffles to serious combat, we removed Rosey from the bird area. We had volunteers visit and read to him, we gave him exciting treats throughout the day, and we gave him very spacious accommodations in the barn, but he was alone, had no purpose, and it was so sad to watch.

Peppermint Patty was believed to have fallen off a truck bound for slaughter. She was found and brought to The Gentle Barn and after her thirty-day quarantine, we realized that she would be perfect for Rosey. When we introduced them, you would have thought Rosey had won the lottery! He puffed up his feathers, crowed his loudest crow, flapped his wings, danced around her, and then set to the task of finding treats for her in the dirt. As soon as he would find a choice morsel, he would make a distinct sound that would have her come running, and then he would stand proudly by as she ate the treat. Peppermint was very independent and explored as if she had music going on in her head at all times. She often seemed lost in her own little world. But Rosey would follow after her and work so hard to gain her attention and her affections. For Rosey, it was absolutely love at first sight, and he loved her dearly for the rest of her life. For Peppermint Patty it took longer to acknowledge and bond with him, but slowly he wormed his way into her heart.

Because they could not be in the same area as Rick and the other ladies, Rosey and Peppermint had their own area by the pigs, and their own little house fit with a perch, a nest, and a heater for winter. They had the same routine each day. Early in the morning, their door would be opened, and they would be served breakfast. Peppermint Patty always ate first while Rosey stood protectively by. He ate only when she was finished. After breakfast, Peppermint would nest and lay an egg while he stood guard. When she was done, they both would go dig for seeds and bugs in the pig stall bedding, explore the pasture, suntan, or rest in the shade. But no matter what occupied their time during the day, one thing was for sure, they were always together lost in inside jokes, and private conversations reserved only for couples who are very much in love. In the evenings they would have dinner in the same fashion as breakfast, and then would hop into their little house side by side on their perch, their wings touching, close their eyes and go to sleep. As long as they had each other, they had everything they needed.

About a year ago Peppermint Patty started losing weight and her energy declined. We knew right away that there was something wrong. We brought her to The University of Tennessee Knoxville, and of course Rosey went with her. Tests showed that she had a large tumor in her abdomen. She went in for surgery and we prayed, for Rosey’s sake, that she would survive. The surgeons removed the tumor but didn’t know if it would grow back or not. Delighted to have a chance, we took her and her love home, hopeful to have more time with her. And thankfully Patty’s tumor never did grow back. She gained the weight back, she resumed their daily ritual, and she thrived.

On November 2nd, 2020, Peppermint Patty passed away unexpectedly in her sleep. We don’t know if she passed of old age or a heart attack, but we know for sure she didn’t suffer and was not in any pain. But Rosy is lost. He is angry and sad and alone. He has no one to guard during meals, he has no companionship on adventures, and he lost the love of his life who filled him with complete and utter joy. The greater the love, the greater the loss, and for Rosy the loss is unbearable. We are spending time with him, giving his extra treats, and hoping that we’ll soon find a hen or two in need of a home, knowing that whoever we find will never replace his soul mate.

Whoever thinks animals have no souls, have no language, are devoid of personalities, or don’t love, are not paying attention. We are all exactly the same, we just look different. There is no difference between the way we love and the way animals love. Sadly, the way we grieve is equal to the way they mourn; just as painful, just as lost, just as hopeless. Rosy is now walking his dark night of the soul, and we will be by his side every step of the way. Please hold Rosy in your thoughts and prayers. May he find peace! May all chickens everywhere have a chance to live in a sanctuary, to fall in love, and even to grieve for a tremendous love lost.

Update:
On the exact day that Rosy lost Peppermint Pattie, one of our staff in TN had a rooster pass away leaving their hen Coal all alone and sad. So they brought her to The Gentle Barn to be with Rosy. They are so happy to have each other! They will never replace their soul mates, but now they can grieve together, support each other, and perhaps have a second chance at love?!