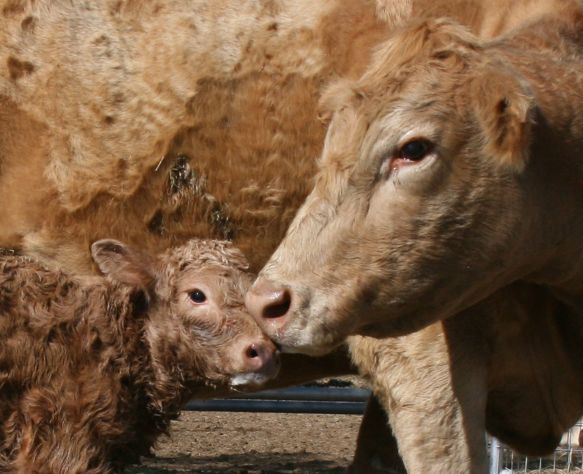 This month we celebrated the seventh birthday of our cow Rumi. He lives at our Sun Chlorella Healing Center with his mom, Serenity. We saved his mom from slaughter and thank goodness we did because a few weeks later she gave birth to her son, Rumi. That is when we learned that most dairy cows are sent purposely pregnant to slaughter so that they weigh more, and therefore bring in more money per pound.

Birth is a wonderful, joyous occasion at The Gentle Barn. We do not have many as we do not breed animals, so we only have a birth when we have rescued a pregnant mom. We didn’t know Serenity was pregnant until we saw her tiny newborn on the ground soaking wet as she dried him, cleaned him, and encouraged him to stand for the first time. We stood at a short distance to celebrate with her and take part in this miracle of life and love. But the minute she realized that we were near, Serenity did something we would never have expected: she stepped over her baby, positioned herself on top of him, and looked at us with terror in her eyes begging us silently not to take him away from her. We immediately retreated so she would not feel afraid, but her pleading eyes haunt me to this day. How many babies have ripped away from her before we saved her?! How cruel was the dairy industry to separate moms and babies and have them powerless to do anything about it?! They want and love their babies as much as we do. 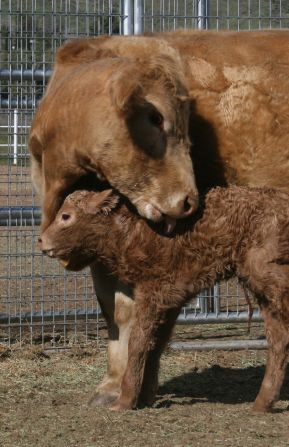 From then on, we gave Serenity and Rumi as much privacy as we possibly could. When we had to clean their barn, we did not look at the baby, to seem as non-threatening as possible, and we kept telling Serenity that she will keep her son and they will be together for the rest of their lives. For the first time in Serenity’s life, she got to raise a baby, nurse him, nurture him, protect him, play with him, and watch him grow. They ate together, relaxed together in the sun, and she bathed him with her tongue from head to toe until his golden curls were sopping wet. Cows grow until they are five years old, but by the time Rumi was three years old he was already much taller than his mom. But Serenity still nursed him till he was four. Rumi had to lie down to reach under her to her udders, but she patiently and quietly stood still allowing him to drink his fill.

As the years passed Serenity realized that we were not going to take her son away from her and she began to relax and trust us. She eventually even allowed us to pet him and her. Now that Rumi is seven years old, he has his friends and activities, but Serenity is never far away and is always watching him as he moves about his day. After breakfast the two of them still groom each other and lie next to each other meditating and chewing their cud. As Serenity moves into old age and Rumi matures, we look forward to watching their relationship change as he slowly starts taking care of her. 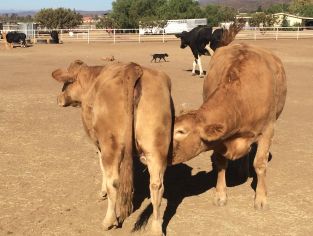 We are honored to have them both in our barnyard, privileged to have given Serenity the gift of raising her last baby, and blessed to use their story to remind people that animals have the same feelings for their families as we do, and they deserve the same protections, rights, and freedoms as we enjoy.

I believe with every fiber of my being that one day, in our lifetime, we will have a gentle world in which all mommies everywhere will be able to raise and love their babies, no matter what species they are. That all babies will be raised with love, family, and safety, no matter what species they are. And we will raise our children to value, respect, and revere life in all its many wonderful forms. It’s a fantastic time to be alive, and I am so excited to be a part of the movement towards kindness, compassion, gentleness, and peace for all of us!