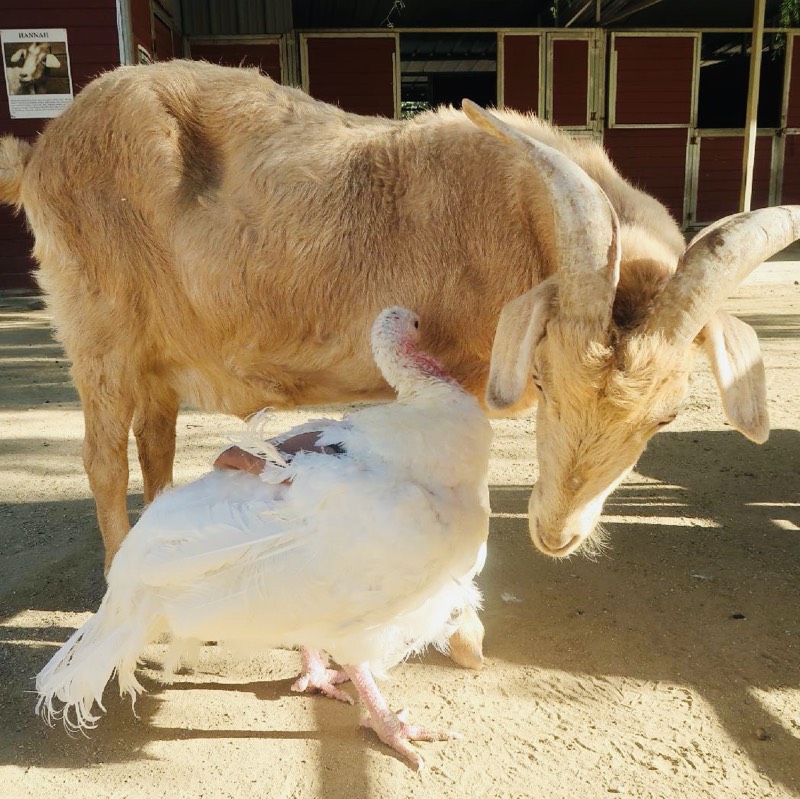 The animals at The Gentle Barn have earned their independence from the meat, poultry, and dairy industries and are now our family, friends, and loved ones for the rest of their lives. They are no longer numbers or property, they are the beloved, sentient beings they were always meant to be. And once home, they develop friendships that take our breath away!

One of the most extraordinary friendships at The Gentle Barn is between our California goat, Gus, and his best friend Sun, our turkey. I’m not sure what attracted them to each other, but Sun doesn’t have affection for any other goat, and Gus does not hang out with any other turkeys. Every single day after breakfast the two of them find each other and stand together for hours. They stand next to each other, close their eyes, and seem to be in a secret conversation that only the two of them understand. And if anyone else tries to join in, they both move away, preferring to be alone together. It is obvious that both Gus and Sun are oblivious to the differences that might otherwise separate them, and instead see only their commonalities; like their gentleness, their shared past of fear and loneliness, and their mutual love of meditation and cuddling. If they were to see themselves in a mirror, I think they would be shocked, as in their mind's eye, they are exactly the same, each radiating out the shape and color of love.

Another wonderful friendship is between our Sheep, Einstein, and our goat Hazel in St Louis, Missouri. Hazel had been at The Gentle Barn for some time when the frightened, shaken, and feral Einstein came in. He had lived alone and wild for many years and he needed a friend badly! He was covered in ticks, malnourished, and terrified of humans. While he learned to trust us, he desperately needed someone who could calm his nerves, show him that it was safe and that he could bond with. Hazel stepped into this role immediately without hesitation. She never, not once treated him as someone other than exactly like herself. She could remember a time in her own life when she was scared and lonely, and she appreciated the comfort she received at our sanctuary. She understood what he was going through and that drew him to her. She sat just on the other side of the fence dividing their stall, ate at the same time as him, and even bleated for him when he felt concerned. She made sure he could see her being pet by us, so she could show him he was ok, and even slept by his side. Einstein trusts us completely now and has made a full recovery, leaving his past behind him. And Hazel is still by his side, his first and forever best friend. It doesn’t matter that she is a goat and he a sheep, they speak the same language, the language of love and gentleness!

In Tennessee, we have a lovely friendship budding between our goat, Merlin, and our miniature horse, Princess Pebble. I would never have thought that the two would be friends by the way Pebble pins her ears, tilts her back legs threateningly, and yells at everyone to stay away from her. She is very bossy and has clear and defined rules that must be obeyed by all of us. But kind and lovely Merlin made it through her bossy barrier and into her heart forever. He always greets her each morning with a friendly kiss on the nose, grazes by her side, checks on her when she is agitated, supports her when being groomed, and takes care of her as if she were part of his own family. With a group of goats and a lone horse in a pasture together, it might be easy to picture the pony being left out and isolated, but not with Merlin in charge. He said to Pebble, “you are one of us” and was not interested in her protests. The four of them are one beautiful family and not one of them can find an odd member. They all eat hay, breath air, love life, feel happy or sad sometimes, and call The Gentle Barn home, and that’s enough in common for them! 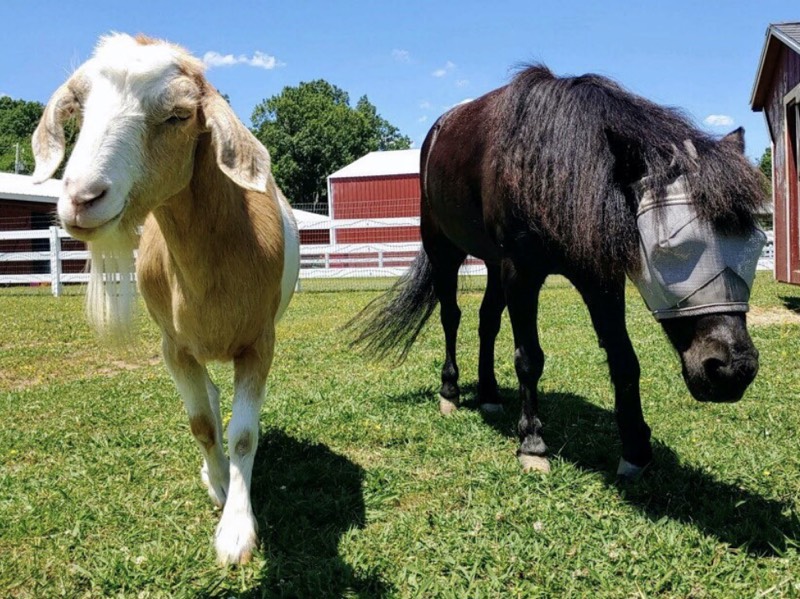 If animals of all kinds can ignore differences and see only what unites them, I’m thinking all of us can too! Learning from our animal ambassadors, I’m yearning for more kind and gentle humanity where we can see clearly that all beings, human and non, are the same. It is not our bodies that describe us, it is our hearts! It is not our religion, ethnicity, gender, or species that define us, it is our souls. And it is not our individual roles in this lifetime that separate us, it is our common experience on this planet in whatever body we came with that unites us. We all eat, drink, pee, poop, sleep, love, fear, hurt, cry, and laugh, and that is enough in common for me! And I’m declaring my independence from eating another, hurting another, judging another, or rejecting another. It is time for love! It is indeed high time for love!