Socks - An Honor and a Privilege 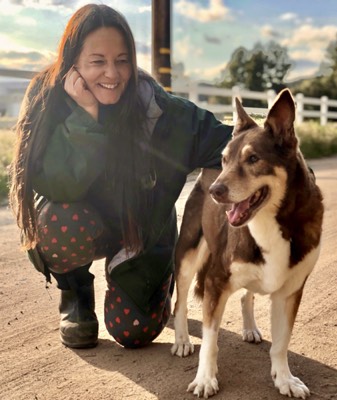 I am writing this tribute to one of my closest friends while she is still here with me. I don’t want to write this after she has gone, out of sorrow; that would not honor her memory. Instead, I am writing this while she is sitting beside me in a state of grace, during her final days, while I am feeling incredibly grateful for knowing and loving such an angel!

Socks came to us many years ago after we had taken in a homeless man to live with us. The man was very active, and his birthday was coming up. He wanted his very own companion, so we went to the animal shelter in search of an active dog who could keep up with him. The shelter staff pointed out a dog who seemed lethargic, saying that she was just depressed because she had been returned for the third time for having too much energy. They assured us that once her sadness was over, she would prove to be the energetic pup we were looking for. We took Socks home and sure enough, three weeks later once she had settled in, she was not only energetic but completely nocturnal. She could scale an eight-foot fence, run and play all night, and rarely slept. She was a perfect fit for Mark!

Two years later, Mark was back on his feet and preparing to move to Florida. He thought it best to go on his adventure alone and leave Socks here with us. We wished him well and Socks became our dog. She did not want to come to bed in the evenings and preferred to run all night, so we installed a dog door so she could come and go as she pleased. She would romp around our five acres and bring us found treasure while we were sleeping. When we awoke, we had leaves, sticks, rocks, and horse brushes in bed with us, with Socks smiling, very pleased with herself. We would always thank her for her gifts.

Once we bonded, Socks who was a very accomplished hunter, would catch rabbits and squirrels and bring them back to The Gentle Barn and lay them at my feet. I knew she was doing this to honor me and acknowledge me as her leader, and I was grateful. But I did not want to see these little animals harmed. I thanked Socks for the intention behind her gifts and gently asked her if instead, she might consider bringing me a leaf or a flower. It took a while to convince her, without hurting her feelings, that maybe these gifts were not such a great idea, but she finally understood how to be gentle with all animals.

Socks ran wild and free for many years. The Gentle Barn was the perfect place for her. While fences elsewhere could not contain her, at The Gentle Barn there were no fences and she could romp as long as she liked. While she might have kept others up all night, with us she could do her thing and we could sleep while she did it. She could be herself, and we could love and appreciate her just as she was. Socks soon because the fan-favorite of the at-risk teens we hosted, as they knew all too much about not being accepted for who they were. Socks gave them hope that they too could find family and friends who would one day take them as they were. 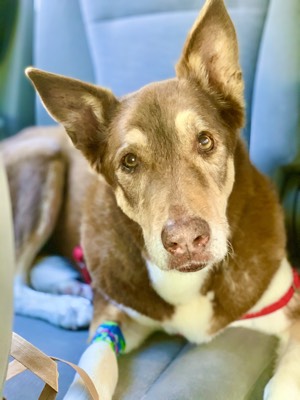 A few years later Socks matured and finally started coming to bed at night. Jay and I slept much better knowing that she was there with us. By then Socks had really connected with us and it was hard to believe that she ever belonged to anyone else; she was so clearly meant to be part of our family. Socks was so intelligent that I began training her to be my service dog to help me with PTSD. She started going everywhere with me and I, in turn, felt very safe and cared for. Socks seemed to know intrinsically how to behave in every circumstance. On our property, if another dog were to wander in, Socks would be very protective and defensive over her territory. But outside our land, she was very submissive and got along with everyone. While at home she was very playful and energetic, when we went out somewhere, she lay down like a perfect angel and was very polite. At home Socks might scold our kids if they were to pet her while she was sleeping, but outside the house and our own family, she never growled at anyone. Socks followed me everywhere I went and always came when I called her. Aside from Jay, Socks became my very best friend.

Socks came with us to help a sanctuary in trouble in Boston, she helped us open The Gentle Barn in Missouri, she came to Summerfest in Philadelphia, she road in many airplanes, busses, trains, and cars and she was always a perfect lady. We went camping and white river rafting together, we played in the snow, we hiked more trails than I can count, and she even road cross country from California to Tennessee to bring our turkey, Adeline to our other Gentle Barn location, driving in the back seat right next to Adeline sharing snacks. She played tag with our donkey Addison, she kissed the cows’ noses, and she was always gentle with our chicken, Peggy who lived in the house.

When Socks turned about fourteen, she developed arthritis in both shoulders and became hard of hearing. It was time to retire her as my service dog. I could not bear the thought of going anywhere without her, but I could no longer ask her to walk through huge airports or jump in and out of the car. I was devastated, but Socks was thrilled to retire. Socks had always been the absolute perfect dog: she never grabbed food off the counter, ate out of the trash, peed on the floor, or chewed things up. She was always perfect. But now she could do everything other dogs did. Socks and I wrote out a bucket list of all the things she wanted to do in her retirement. She wanted to chew up her toys, pee on the floor, rip up a dog bed, pull food off the counter, eat everything I ate, eat out of the trash, order me around, and have a girls’ day at the beach. After being there for me for so long, I was happy to fulfill her requests and clean up after her.

She started barking at me at six o’clock in the morning to wake me up, even on my days off; she had never done that before. Even though I was hoping to sleep a little more, I woke with a huge smile on my face every morning. She started barking at me when I ate, and I had to split whatever I was having with her. Most of the things on her bucket list she only wanted to try once. She only peed on the floor once, in each room, and then she was done trying that. I laughed while I cleaned it up because she seemed so proud of herself. She only destroyed a dog bed once, but she chewed it into so many tiny pieces that it took me three hours to clean it up; I was happy to do it. She only ate out of the trash once, but when she did, she strew garbage all over the house, what a mess! The look on her face when I discovered what she had done was pure satisfaction and I assured her that I did not mind cleaning it up! The last thing on her list was to have a girls’ day at the beach. And a few months ago, my daughter, Cheyanne and I took Socks to the beach. We spread out a blanket and a picnic for all of us and put our toes in the sand with a full view of the glistening waves. Socks had a smile on her face the entire time.

When Socks retired as my service dog, I could not bear the thought of replacing her, so for two years, I traveled without a dog. Then my dad got a puppy and very quickly realized that he was in over his head. He was about to have shoulder surgery and being pulled on by a big pup was not going to work. My dad asked me to take his puppy. The minute I met Sky I knew that he was to be my next service dog. Guilt-ridden, I asked Socks if she would mind and she told me how relieved she felt; finally, she had someone who could take care of me and she could enjoy retirement without worrying about me. She told me that she would stay with me until Sky turned a year and would train him. I didn’t think much of it at the time, but with the last item on Socks’ bucket list satisfied Socks began to decline. Socks’ appetite diminished, and she was having more and more trouble walking. I brought her to the doctor to see if there was anything, I could do for her, and that is when they discovered cancer in her stomach. They sent Socks home with pain meds, anti-nausea medication, and anti-biotics and said that that would buy us a bit more time.

Socks and I have been enjoying a nice long goodbye. I have been hand feeding her anything and everything that I can get her to eat, spooning her for hours, and taking leisurely walks each evening around the property at her pace. I have been kissing her gorgeous face and telling her over and over again how eternally grateful I am to have known and loved her. We have been strolling down memory lane every day, remembering the extraordinary experiences we have shared together. And I have been making sure she feels no discomfort with acupuncture, subcutaneous fluids, and her meds. She is eating less and less; she is getting weaker and weaker. I fear we have very little time left. Sky just turned a year old.

Two things are keeping me intact: one, I believe that Socks is leaving her body, but not leaving me. That our love and our relationship will continue, and she will always be with me, our hearts always connected. And two, I feel so blessed to have known her. Out of all the countries in the world, of all the states in our country, of all the cities in our state, and all the homes in our city, she chose ours! She could have lived anywhere with anyone, but she lived with us! It was our family who got to watch her grow up and play. It was Jay and I that were woken up with her bright eyes, alert ears, and melodic bark. And it was us who got the pleasure of her company, the peace of her protection, the joy of her loyalty, and the delight of her devotion.

It will take every ounce of strength and courage I have to walk her home when she is ready because I don’t want to see her go. And it will take every inch of wisdom and grace to not fall apart once she has transitioned. But I am staying strong for her because she deserves to be walked home without fear or sadness, but with jubilation, applause and a standing ovation. Socks is a hero and an angel, and it was an honor and a privilege to have known her, cared for her and served her.