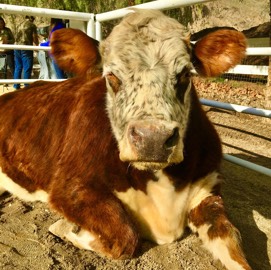 Horses, cows, and pigs live in a matriarchal society. It is typically the smallest, oldest, and mightiest female that will lead the family to safety, food, and water. She will nurture the babies, discipline the teens, provide wisdom for her entire family, and make all the important decisions. Even in our sanctuary, where there are not many decisions to be made other than when to eat, sleep, or play, our cows, horses, and pigs have always had a matriarch. The matriarch might choose a mate and he will implement her decisions and back her up with the necessary muscle and force, but she is ultimately in charge.

In our barnyard, our cow Karma is our matriarch. She is one of the smallest and oldest cows we have, but she is by far the wisest, and you can tell just by looking in her eyes or hugging her to feel her energy. She does not get shaken or ruffled very easily. She models maturity to everyone else. She is always watching and alert. She is very generous to the others, making time to groom them every day. But she does not tolerate any other female close to her mate, Forgiveness. And if our youngster, Ferdinand is disrespectful, Karma will put him in the corner for a time out or send Forgiveness to do it. She leads everyone to the feeders for meals, she hosts grooming parties afterward, and she guides daily meditations. And in the fall and spring when we trim their hooves, she goes first, quiet and calm, to show everyone that it is safe. Not only do all the other cows respect karma and go to her for advice, but so do I. If I am having a bad day, I go straight to karma, put my face down on her soft, shaggy shoulder, close my eyes, and take in her enormously strong love; she makes everything better! 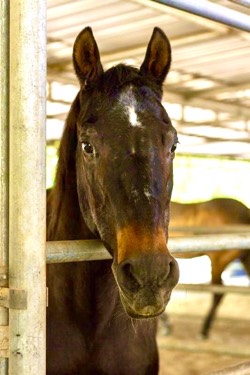 Our horse family is a little lost ever since our horse matriarch, Sasha passed away last summer. Sasha was our matriarch for sixteen years, and Sasha and her husband, Caesar were the ultimate power couple: her brain and powerful instincts along with his bronze ruled the world. Everyone in that family knew their place and seemed happy and content. Sasha would always go to dinner first, leading the way for her family, and then Caesar would let everyone else go ahead of him, watching to make sure everyone got into the barn ok. Sasha made sure all the youngsters were behaving, and there were never any fights while she was here. She spent time every day with all her loved ones, resting in the shade with her mares in the mornings, playing friskily with the geldings in the afternoons, and of course spending hours in intimate discussions with Caesar. She was always the first to get to the fence for carrots during a tour, instructing all the others to follow. And needed only flick her ears slightly for everyone to know when to leave her alone. Her voice was subtle but very loud and clear. She never got upset or lost her cool. She was poised and deliberate always. As her health failed and we prepared to bring her to the hospital, she wisely knew that she would never return and asked to speak one last time to Caesar. When we brought him into the barn to see her, the two of them stood in the silent conversation for over an hour, with Sasha thanking him for his loyalty and friendship, and handing him her crown as she left. Since Sasha passed away Caesar is taking good care of the others, and the other females are making sure Caesar still feels full of purpose and importance. But no one will ever fill Sasha’s shoes and it will take a long while before any of the others mature enough to take her place as matriarch. Our horse herd feels like a Kingdom without its queen. And our energy healers come out weekly, as I think the mourning process will be long and hard for all of us.

At the start of The Gentle Barn, we had a female farm pig named Susie Q who had escaped a slaughterhouse. She was scared and depressed at first, but soon became the matriarch of our upper barnyard. When orphaned piglets were rescued, SusieQ protected them and raised them. When arguments broke out, she intervened immediately. And when anyone was naughty, she would rule with an iron fist and end the behavior right away. She raised many piggies and instilled peace and harmony in the barnyard. After she passed away, we had male pigs for the next decade. Without an empress, the boys pranked each other and argued, and much of the time had to be separated. Biscuit would tiptoe into Zeus’ room while Zeus was sleeping and bite him on the butt. Then Biscuit would roar with laughter while Zeus woke up startled and scrambling. Zeus would bust into the potbellied pig area and poke them with his nose while they squealed and complained. When I told him to leave, he actually tried to bite me, and I had to have a thirty-minute lesson with an adolescent pig about manners. And when Honey Bear joined us, Zeus wasn’t interested in sharing the yard with a male stranger and they had a big fight and had to be separated for the rest of Zeus’ life. We needed a matriarch, and fast! When Menorah arrived a few months ago I soon realized that we were not just looking at a safe, happy family, or a way to open people’s hearts about pigs, but we had also found our next matriarch; when the goats and sheep go into her room, she chases them out. When the goats try to bully her babies, she charged them and moved them away. When she first arrived, and her babies were small she would nurse them every two hours by gathering them all up and laying down in the middle of the barnyard. But slowly as they grew and ate solid food, she started weening them to three times a day, then to only once a day before bedtime, and finally to weaning them completely. She is stern but kind. She is loving but strong. She loves all the animals in the barnyard but must be respected. She responds to her babies the minute they cry, but won’t give in when they try to nurse, urging them to eat hay or grain. She loves Honey Bear already and is going to be great for Humble and Barry who could use a nice, strong mom. 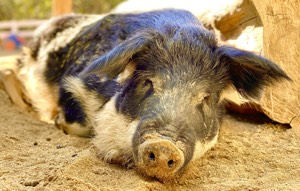 Our little naughty barnyard has turned into an orderly, organized, and well-behaved heaven for not only all the pigs but for every animal. Thank goodness Menorah is small and will live a long time. I am so looking forward to enjoying her reign for many, many years. Long live the queen!

As humans, we currently live in a patriarchal society, but it hasn’t always been this way. As most of our animals, Indigenous cultures have always been matriarchal societies. Their shaman, healers, and leaders have always been women. The women support each other in birth, teach the children, gather the healing herbs, cure the sick, care for the elderly, lead ceremony, and pass on traditions to the next generation. When Europe took over America and many other countries, indigenous people were cast out and destroyed, medicine women were seen as witches and burned at the stake, male-dominated churches sprouted up, male-run hospitals were erected, and here we are today led by this male energy. This male energy has led us through many technological and medical advances, established America as a world superpower, put men on the moon, and elevated our species to first-world living. We have come a long way. But the pendulum has swung too far, destroying the environment, rendering many species extinct, bringing illness to our bodies, and horrifically enslaving animals. Continuing like this is not sustainable! We need to bring the feminine energy back. This is a call for all of us to awaken, especially the matriarchs! We need to reconnect with nature, learn from the wisdom of animals, teach our children about empathy and compassion, and lead the way to gentleness and kindness. Where dominance once brought success, we now need community. Where competition once inspired work ethic, we now need to lift each other up. Where living off others once brought survival, we now need to share this planet with others, humans and animals alike. And most importantly we need to rise up as matriarchs, listen to our intuition, follow our impulses, remember who we are and why we’ve come, and bring our planet back into balance.