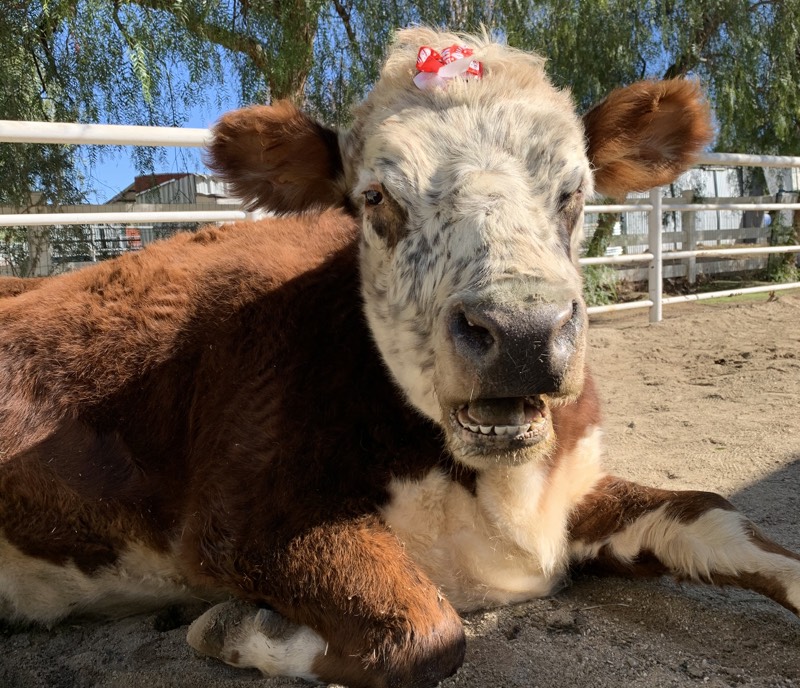 Years ago, one of our wise mother cows, Witness prepared to make her transition. The entire cow family gathered around her and took turns stepping forward, laying their heads on her side to pay their respects. Once the entire family said their goodbyes, they went off to dinner, leaving one to stay with her. Then thirty minutes later another cow came to relieve the first so she could eat. They took turns so there was always someone with her while we waited for the veterinarian to arrive. When the vet finally showed up, the cow that was waiting with her left, and I had the extreme honor of holding Witness’ head in my lap as she transitioned out of her body.


Later I communicated with our matriarch cow, karma and told her that I was sorry for her loss. “Loss?”, she asked, “what loss?” “Well Witness just died”, I said. Karma shook her head and said as patiently as she could through her frustration, “There is no such thing as loss or death! Witness had to step out of her failing body, but her life force, her spirit, and her energy are just as huge as they always have been. She is right here, and we can connect to her and her wisdom anytime we wish. Karma then went on to explain that the life force never dies, it only changes forms. And the same things that connect us when we are in a body, still connect us when someone has to leave their body. If someone is passionate about the work that we do here, or in love with our family, they remain linked even when they are in spirit.

Years later Karma’s son Mr. Rojas passed away; he was much bigger than she was, so she outlived him. She was very sad and took a long while to grieve. I reminded her of the conversation we had about Witness and asked her why was she so depressed about her son if there was no such thing as loss or death? Karma explained to me that even though her son was and would always be with her in spirit, she was experiencing the physical loss of a very meaningful physical relationship. She loved giving him a bath with her tongue, or head butting with him in play, eating meals with him by her side, or just laying right next to him in the sun with both their eyes closed as they enjoyed each other’s company. Karma acknowledged that her son was not gone, but their relationship had changed from a physical one of touch, to one of spirit. Change was hard, and she had to process the transformation and get used to their new nonphysical relationship. With the help of her bovine and human family, Karma slowly recovered, and a few months later she was back to being bright eyed and playful, meditating in the sun, no doubt feeling her boy right next to her.

Our society teaches us that “death” is a tragedy. It teaches us to fear it, avoid it at all costs, and grieve terribly for anyone who succumbs to it. The word “death” is synonymous to an end, an expiration, and a final exit. Most traditions do not teach us to connect with the “departed” or find a way to feel gratitude or celebrate their life. But in the wake of the many transitions we have had here at The Gentle Barn over the Last six months, I find myself clinging to Karma’s teachings for sanity. And I am trying very hard to celebrate their life, instead of grieving, and connect with their souls, instead of feeling their loss. I am knowing that Zeus, Mario, Peggy, Sasha, Bonsai, Sampson, and the many others that I have had the privilege to love are still with me, I just need to trust my heart more than my eyes. They are still invested in the work that we do, they are still guiding and assisting us, and they live on in every single heart that they have opened during their ambassadorship. If we could only see the barnyard through karma’s eyes, we would see a yard full of so many angels, there would hardly be room to stand! And once I get used to our relationship transitioning from a physical one to a spiritual one, I will feel so elated that out of all the barnyards in the world, they came to live in mine and I get to love them with my whole heart and always will!