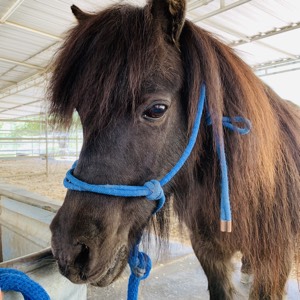 Bonsai was an enormous, mighty, strong, brave, courageous, opinionated, and feisty giant who ironically came to us in a miniature horse’s body. He was the victim of severe abuse for his first six years of life until he was finally confiscated, saved, and brought to us to heal. It took two years to earn his trust, and ever since then he made sure we never took it for granted. He didn’t walk, he pranced. He held his head high and proud. His best friend was a donkey and they played, wrestled, and chased each other every day like puppies. He loved to bite at people to feel powerful, but he never made contact or hurt anyone. When he did that to me, I would laugh, throw my arms around him, tell him that he was so ferocious, and then kiss him all over his face. He loved that game and we played it until the very end. But as tuff as he was, the minute children were around, he would get serious, and still, and be their hero to walk, brush, or hug. For years he went with us to South Central to work with children with autism. Bonsai would let them crawl all over him and even under him. He would hold still for them to brush his long main and tail and groom his body. He absolutely loved his job with those kids! He allowed children in foster care to take him for walks on the trail, patiently following behind them, and gently leading them back home when they had no confidence to lead him. He allowed all our guests to give him carrots and was gentle with the tiniest fingers. And he was the love of our lives! 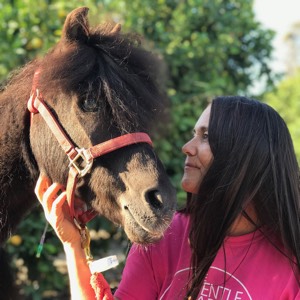 When I think of Bonsai, most of all I think of the time we hosted a group of children in foster care a few years ago. Before the kids were even out of the bus, the councilors warned me about Ethan: heavily medicated, and extremely disruptive. They said that they did not want to bring him. He had begged them for a chance, but he was already acting out on the bus. I told them that he is the exact teen who needs us the most and assured them that it would be fine. The councilors reluctantly opened the bus doors. I could have picked Ethan from a mile away; he walked off the bus angrily, keeping his head to the ground, no eye contact, arms folded in front of his chest defensively, and wouldn’t answer when talked to. I invited the children to sit at our picnic tables while I told them about The Gentle Barn and the animals. They all gathered around and sat down politely, but Ethan stayed twenty feet back, kicking at the dirt. I talked loudly so he could hear me. 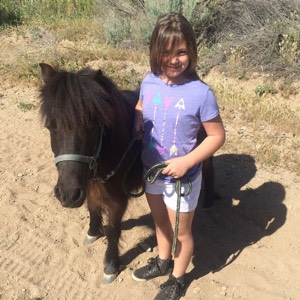 When I was done with my presentation, I brought all the kids to meet Bonsai and hear his story. I told them that Bonsai was beaten by an alcoholic till he was six years old. I described how scared and alone he was. And I finished by saying that by the time Bonsai was seven, he was so damaged that he decided to never trust anyone ever again. Ethan suddenly pushed through the crowd and ran up to me, pulled on my arm and demanded that I tell the story again. Ethan looked directly into my eyes and was at full attention. When the story was over, he begged me to tell it again. I told the story about four times, and then he ran over to Jay and had him tell the story a few more times. Then Ethan ran over to Bonsai, wrapped his arms around his neck , and whispered in his ear with tears streaming down his face, “I am so sorry that happened to you, you didn’t deserve it, you are going to be alright, it’s going to be OK.”

I went over to the councilors and asked them what was going on, and they explained that I had just told Ethan’s story too. Ethan had been beaten by his alcoholic stepfather until he was taken out of his home, at the age of seven. Ethan too, trusted no one. Ethan thought that he was alone with his pain and no one understood him. With Bonsai, Ethan was able to see that someone did understand his pain, and he was not alone. And if Bonsai was safe in his second chance, so was Ethan. If Bonsai could learn to trust, so could Ethan. Over the course of that year, in our monthly Peace Enhancement Program, Ethan began to let others in, to engage, to forgive, and to move on past his pain towards a wonderful future where he could trust and be loved. He stopped acting out in the classroom, he started making friends and good grades, and by the time he graduated our program he was off medication and put on the foster/adoption list. Bonsai changed Ethan’s life forever! 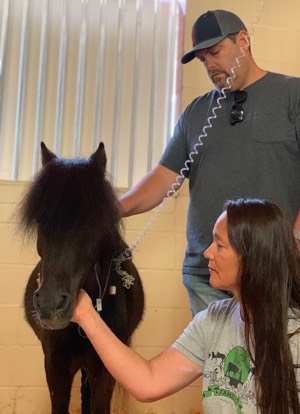 Bonsai fell ill about five months ago. At the age of 23 Bonsai got an intestinal infection which turned into Salmonella. He was very sick, in pain, wasn’t eating, and looked awful. The doctors were doing all they could for him. I asked Bonsai what he wanted to do, and despite how uncomfortable he was, he said he wanted to try to come home. So we gave him the very best vet care, made sure we were visiting him every single day, and sent acupuncturists, massage therapists, and energy workers to the hospital to treat him each week. Slowly Bonsai’s condition improved. He was in less pain, started eating, was gaining weight, and seemed to brighten up. The doctors were waiting for three consecutive fecal cultures to discharge him, but we thought his homecoming was a certainty. We started planning the welcome home party with decorations, streamers, banners, music, and treats, and then suddenly he nose-dived without warning. He spiked a fever, stopped eating, and his pain had returned. The veterinarians tried everything they could think of to manage his symptoms and get him better, but Bonsai’s body just could not recover this time. Bonsai passed away at one thirty on Saturday morning, and despite his size, he left a very large hoof print on all our hearts!

In the hospital I spent each visit describing Bonsai’s homecoming. I promised him every day that we would have a party for him. I told him how he would get to have deep conversations with Caesar, grooming sessions with lance, and play with his buddy Addison. and I vowed to take him for walks on his favorite trail. And even though Bonsai’s body gave out, I am still going to keep my promise to him. We will have a memorial for Bonsai where all our staff and volunteers go for a walk on Bonsai’s favorite trail with the other horses and trade stories and memories of him. Afterwards we will plant a tree in his memory, care for it, and watch it grow as the physical embodiment of the tiny horse we all loved so much. And because Bonsai was so strong and fought so very hard to get over his illness, I will forever and always refer to him as Warrior Bonsai.

We plan to paint a mural of Bonsai and the other horses we have said farewell to over the years. We are looking for a muralist who could help us. If you know anyone who lives in Los Angeles and could do it, please email us at info@gentlebarn.org Thank you so much for loving him with us, keeping us in your thoughts and prayers as we mourn, and donating for his vet bill so he could have the best chance possible. He will be missed!

To help make a contribution in Bonsai's honor, click on the buttons below.

Sponsor One Of Bonsai's Friends
Donate To Our Emergency Vet Fund