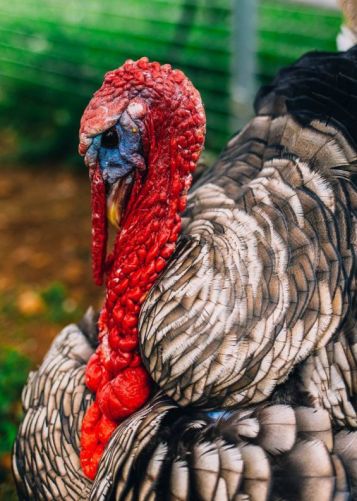 Luke Skywalker is a Thanksgiving survivor, and one of the very first turkeys rescued at our Tennessee location. Luke, Heather, and Payton Manning were saved just before Thanksgiving and brought home to The Gentle Barn, filthy and terrified. During their thirty day quarantine, we began the long journey towards their emotional and physical recovery. We had volunteers and staff sit with them every day, reading out loud, singing to them, and meditating with them. In time they realized that they were safe, loved, and respected with us and grew into gorgeous, happy, and loved turkeys.

For eighteen months the two brothers lived in harmony together, but once they hit sexual maturity the boys started fighting. At first, it was just play fighting, like puppies do when they’re small, but by the time they were two, their brawls turned serious and we had to separate them. Payton Manning moves to our St. Louis location to have a kingdom of his own, and Luke stayed in Tennessee with his sister and other rescued birds. And peace was restored to The Gentle Barn once more.

Like any great Jedi, Luke Skywalker is radiant and his force is very strong. He parades around for a living, displaying his magical feathers and colors to anyone who will watch. When no one is paying attention, he makes loud sneezing and chirping sounds to be seen. He shakes his tail feathers, extends his wings, and turns around and around dazzling all of us with his splendor. Like all male turkeys, Skywalker’s head changes colors with his mood: when he’s relaxed and calm, his head is a whitish, milky, blue. When he’s excited his head turns a bright red. He does not like being touched but lives to protect his family and to be called handsome. In the summer, Luke will be turning four and will rule our castle and dazzle all of us for the rest of his days. May they be many!

Sponsor this hero from a galaxy far, far away and be part of his journey! You'll help contribute to the care and support that he needs and you'll be able to receive updates on how he's doing and a new picture every month. May the force be with you!