Posted on May 03, 2019  | Tags: Stanley the Sheep, Josh the Sheep
By Ellie Laks, Founder of The Gentle Barn 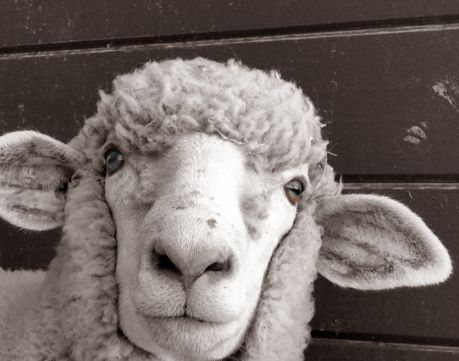 Stanley was born a twin and loved very much by his mommy and brother. The agricultural college where they lived would keep the mom and brother to breed again but had no use for two boys. They were going to send Stanley to auction, but the students found out and arranged for us to take him instead. We begged the college to allow us to take the entire family so they could stay together, but they refused. Then we tried to get more time for Stanley to be with his mom, even offering to pay board for him, so he could be weaned gently, but they refused that as well. They told us to come get him right away or he would be going to auction. We knew we were saving Stanley, but all Staley knew was that one minute he was safe and had his mom’s love, and the next minute he was taken away with strangers.

Stanley was in mourning and we could not comfort him, because we were the very people that took him away. He was scared, alone, and trusted no one. I was desperate to help him! So, I thought long and hard about who could befriend him that he would accept. First I tried volunteers and staff: we played music, read out loud, and meditated, nothing worked…until Josh. We had a wise and loving sheep who was rescued with his mom when he was just a baby. He had his mom his whole life until she passed away of old age. He was nurtured and filled up and I thought maybe he could pay it forward to Stanley? I asked Josh if he would be willing to spend the thirty-day quarantine with Stanley, become his friend, and teach him to trust us, and Josh said yes.

You can sponsor Stanley by clicking here 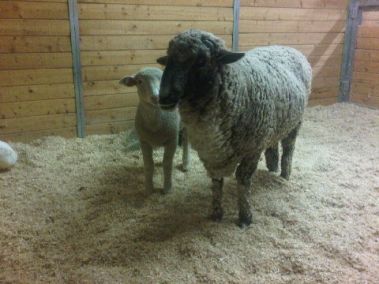 Josh spent many days lying next to Stanley, eating with him, sleeping with him, and bonding with him so he didn’t feel so alone. Over the ensuing weeks, Stanley’s appetite increased, he stopped crying out for his mom, he even started playing with Josh and following Josh to us to receive pats. When the quarantine was over, Josh took Stanley to each and every animal in the barnyard and introduced him one by one, making sure they were all very gentle to him. Josh protected Stanley from rough gestures and bullying. He showed him the best spots to lie in the sun and the finest shade trees. He slowly helped Stanley adopt The Gentle Barn as his home, and all of us as his family. Stanley and Josh were the very best of friends until Josh passed away of old age many years later. Stanley and I were right by his side as Josh transitioned, and I could swear Stanley whispered thank you with me as Josh left.

Today Stanley is a huge, wooly, handsome sheep. He has Elvis like sideburns, a deep, impressive baah, and he is followed around by many female sheep as they try to catch his eye and attention. With his quiet, confident personality, and deep golden eyes, I have never met anyone who didn’t fall in love with Stanley upon meeting him. When I hand out Sun Chlorella Rejuv A Wafer treats to the goats and sheep, Stanley always walks behind me and paws me gently with his foot until I give him more. I cannot resist Stanley’s charm and he basically can have as many treats as he wants from me!
As we approach Mother’s Day I cannot help but think about Stanley’s mom and how they were both robbed of the chance to know each other and be a family. I know that she will always live in his heart, and a part of him will always be empty and aching for her. Animal agriculture is not only about suffering, cruelty, and untimely deaths for millions of animals, it is also about families torn apart, babies and mommies crying for each other on deaf ears, and broken hearts. This coming Mother’s Day I will celebrate my children, human and nonhuman, and be proud and thankful to be a mom. But I will also ache for my animal sisters who never get the chance to raise and nurture their own babies. I believe that one day we will have a gentle world where all mommies can raise and nurture their babies, where all babies will be raised with family, safety, and love, and the freedom, peace, and basic rights that we take for granted will be bestowed on all living beings! Until then, all I can do is tell Stanley every single day that I am sorry and that I love him.

You can sponsor Stanley by clicking here