Hay to The Rescue

Exactly seven years ago, in April 2012 we took in over sixty animals from a cruelty case. There were goats, sheep, cows, and a horse. They were all very sick, with extremely high fevers, parasites, and wounds. They were all terrified of humans. We had a lot of work to do to save them! Before coming to us, they were kept with no shelter, adequate food, or clean water. There was a bathtub full of rotten tomatoes that the animals were trying to eat out of sheer desperation and their faces were covered in filthy, rotten goo; the stench was unbearable. A sea of protruding ribs, infected sores, runny noses, wracking coughs, diarrhea, overgrown toenails, and hopeless eyes.

As our gates opened and the scores of animal control trucks drove up our driveway, we prepared for the fight of our lives to heal these animals and breath the life back into them. We had veterinarians, antibiotics, pain medications, bandages, dewormer medication, thermometers, and volunteers at the ready. But most importantly we had buckets full of fresh, green hay and clean water in every stall, and Sun Chlorella Algae Super Food. We had to boost their immune systems and get nutrients into them quickly, otherwise, all the vet care in the world wouldn’t help them. But if we could help them gain strength, it would aid us in the healing process, and the vet care would be effective. Every morning we took temperatures, gave injections, cleaned wounds, trimmed hooves, cleaned out stalls, and doled out Sun Chlorella by the handfuls. By the time we were done with our morning routine, it was time to start it all over again for the afternoon. But little by little, day by day, the coughs subsided, the temperatures went down, and they started eating with much more appetite. And after a few months, they even started playing. 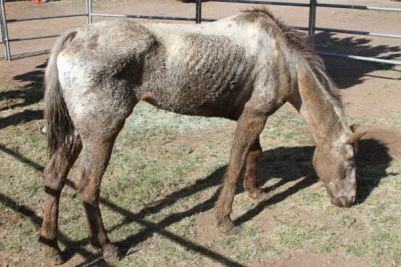 The very last animal that was unloaded from the animal control trailer was a horse. She was so thin that we could count every bone, she was covered in mud and feces, she had a sore on her knee that was infected down to the bone, and she took one look at us and said, “help me!” Her treatments were rigorous, her medications were daily, but very slowly she started to recover. And I think that Sun Chlorella and good quality hay played the biggest part in her healing. With each meal, she started gaining weight and strength. Regular meals proved to her that her suffering was over and that she would never again go hungry. With each mouthful her neglect and abuse were erased, her trust in humans was restored, and her will to live was regained. 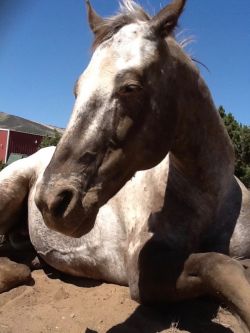 Sun Chlorella graced the horse with the name Hiroka which means beautiful, wise flower in Japanese. Today Hiro is a perfect weight, full of muscle and strength. She has a great appetite, and even though she lost her eyesight to cancer, she has a positive and joyous disposition grateful for every single day that she gets to be here with us. I want to thank each and every one of you who donate for hay because it does so much more than fill the belly: for animals rescued from abuse and neglect, it reawakens the soul!