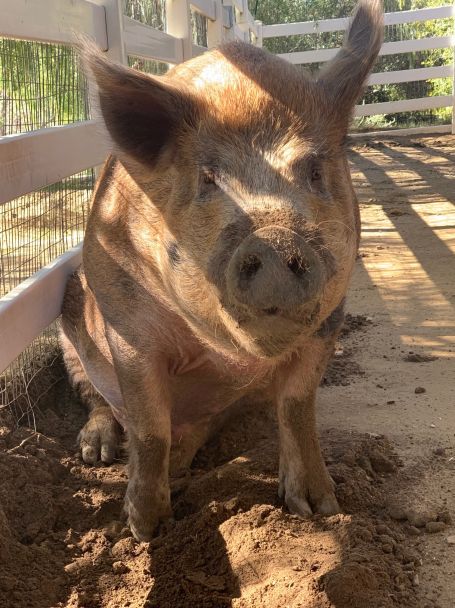 Honey Bear was found wandering down the street about an hour North of The Gentle Barn and picked up by animal control. He was at least two hundred pounds underweight, had multiple open wounds and deep scars, and was frantic. Once we were told about him, we fell in love with him even before we had met him; he sounded like such a nice guy and obviously had suffered a lot. Everyone at the shelter described him as being very gentle and kind, with soft golden eyes and a piggy grunt that was more like a purr.

When we went to bring Honey Bear home, he very easily walked onto our trailer, his blind faith taking our breath away. I'll never forget the moment when we opened the trailer at The Gentle Barn, and he saw his new home for the very first time. He investigated the piggy pool and had his first dip, splashing away and rooting in the mud. He found the water bowl and drank clean, clear water until he was satiated. He made himself at home in his own room, digging a soft bed in the straw and lying down for a belly rub. And when it was dinner time, he didn’t have to wonder when or if food was coming, but instead was served a big warm porridge topped with organic fruits and vegetables, filling his belly and his heart. Honey Bear was food obsessed for the first year, showing us that he had lived quite a while, before being found, without consistent meals. When we offered him a snack he would come running as fast as he could, as if it would disappear if he didn’t hurry. We patiently and steadily offered him large feasts until he slowly started gaining weight and feeling satisfied.

What played the biggest part in Honey Bear’s recovery was being able to snack on grass hay in between meals. The hay was low in calories and he could eat as much as he liked, giving him the feeling of being full, but not harming him in any way. Over time with being able to eat constantly, he started realizing that food was no longer scarce, that he would always be fed and cared for, and he could finally shift his focus on other things like making new friends, taking naps, and hosting pool parties.

Today Honey Bear knows for sure that with us his every need will be granted. He sleeps and dreams, usually accompanied by chickens sitting on him. On sunny days he lounges in the pool for hours. He calmly waits for dinner, no longer desperate or starving. He has gained all his weight back and is a perfect size. He runs around the barnyard daily making sure to get regular exercise. He rolls over for tummy rubs as soon as we touch him. And he takes none of it for granted, always grunting thank you’s and showing his appreciation for his new life; a life that all animals deserve!

When you donate for a bale of hay, you help us feed our animals and prove to them that their pasts, their hunger, and their loneliness is completely over. Donating for hay is not only feeding our animals, but it is helping us heal them. If you haven’t donated to this month’s hay campaign, please go to https://www.gentlebarn.org/donate/ Thank you for helping us heal Honey Bear and all our rescued animals!