It Starts With Hay 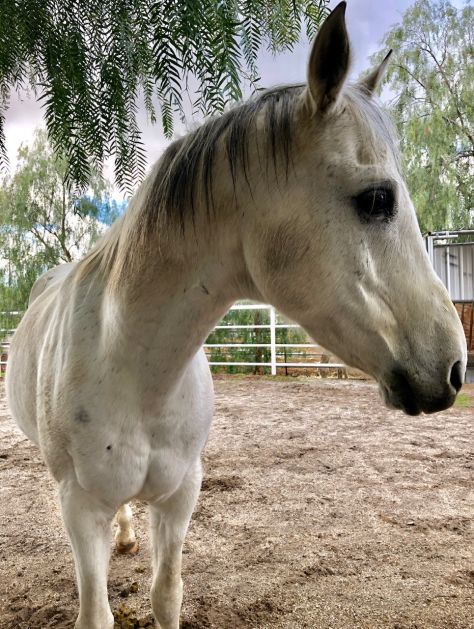 Andrew was used as a stud horse for twenty-five years. He stayed in a twelve by twelve stall alone, unless he was mating with a female. When he was used to stud, he was handled with much cruelty. Andrew learned to fear humans and was living a lonely, unfulfilled life, with not one person who cared about him. When he was too old to mate, he was thrown mercilessly into a ravine to die. By the time the authorities found him and pulled him out of the ravine, he was emaciated, terrified, and hopeless. None of the horse rescues would take him from the animal shelter because they did not accommodate stallions, so he was finally scheduled for euthanasia. While the shelter volunteer held him, and the veterinarian was about to inject him with a lethal dose of euthanol to put him to sleep, she suddenly remembered The Gentle Barn and excitedly asked if the vet would wait a minute so she could call us. As I spoke to her on the phone I could picture Andrew’s sad face in my mind and couldn’t bear the thought of him dying; his life was in my hands. Like most rescues, we also did not accommodate stallions, but I wondered if instead of putting him down, could they neuter him? The volunteer asked the vet and he said yes. A week later once he was healed from his gelding, we went to pick him up and bring him home to recover at The Gentle Barn. I’ll never forget seeing him for the first time: his head hung down to the ground listless, his eyes vacant, his body withered, and every bone protruding.

We had a long way to go until Andrew knew what love was. We had months of work ahead of us to show him a gentle touch, to bond with him, and to gain his trust. But his healing started with fresh hay! With each meal that was delivered on time, with each mouth full of food, and with each full belly, he felt happier, had more energy, and he came alive right before our eyes. His coat started to shine, he began to gain weight, and he felt better. A few months later, no longer focused on starvation or where his next meal would come from, Andrew was free to concentrate on bonding with the other horses, trusting us, and making The Gentle Barn his cherished forever home.

Working to heal that scared and skinny horse seems like a lifetime ago. When I look at Andrew now he is a happy guy with so much life in his eyes, love in his heart, and purpose in his days. He spends most mornings galloping in his pasture with his tail up, mane and tail flowing in the wind like he is renewed and reborn. For the rest of Andrew’s life, he will not only get delicious meals and daily carrots but bedtime cookies and nightly tuck-ins as well.

Your donations for hay made that all possible and continues to ensure that Andrew and all his rescued friends are well cared for, for the rest of their lives. If you have donated for hay this month, thank you so very much for supporting our work and for loving animals with us! If you haven’t donated yet, please help us purchase hay for our 200 rescued animals. Thank you!