Much Better Than a Movie! 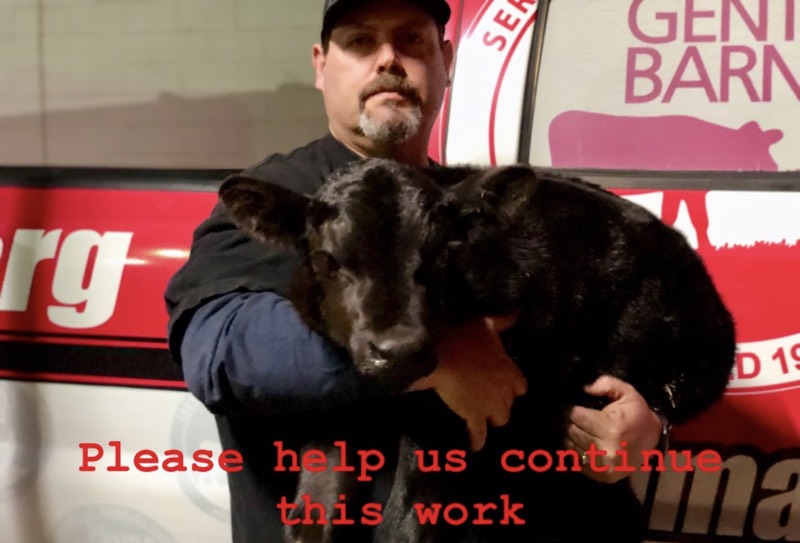 Jay and I were very excited about some downtime between Christmas and New Year's! The office was closed and the barnyard staff were taking very good care of all the animals. Maybe we could go away for a few days? Maybe we could relax a bit and spend time together? Yesterday Jay and I took a slow, leisurely morning, and then went to see a movie. Just as we sat down in our perfect seats and were watching the previews, Jay got a phone call from the owner of the slaughterhouse that gave us Rosita and Eugene many months ago. He said that there was a calf born in the slaughterhouse, that he wanted to give us both the mom and the baby, but his staff slaughtered the mom. He offered us the baby, who by now had been alone without food or water for several hours. So, without hesitation, we ran out of the theater, went home to change clothes and hitch up the truck and trailer, and started driving towards downtown Los Angeles.

I am one of the most sensitive humans, with my heart on my sleeve and every fleeting thought written on my face. I have to admit, I was so scared to be going to a slaughterhouse. Would I see other animals there and want to take them home? Would I be able to contain my emotions? Would I be able to be civil to the workers there knowing how many thousands of cows they kill each year? Would I see things that would scar me for life? Jay had bravely and generously offered to go alone, and at first, I considered it, but then thought of the baby and how much he needed us. I wanted to sit with him as we drove back and sing songs to him. I wanted to hold him in my arms and start his healing process in the car. And I knew that I could be strong for him.

As we drove in silence, each of us dealing with our fears and anxieties in our own ways, I asked my guides for strength and protection. And suddenly my perspective shifted. I realized that I didn’t have to feel sad for the animals there, they were going home, and going home is never a bad thing. They would be free of this world, at peace, and in the arms of the angels. The darkness belonged to the workers there who could take a life without thinking, that were completely disconnected to the love inside themselves, and lost. They were the ones who needed more love, more compassion, and more understanding. And in a strange way, this perspective allowed me to be kind to the staff when we got there. And thank goodness when we arrived there were no other animals and we didn’t see anything other than the baby waiting in a large concrete pen all by himself, waiting for us.

He was so tiny! He was so light in our arms as we carried him to the truck. He sat next to me in the back seat of the truck as I cradled his head in my arms and Jay drove us home safely. I sang him songs and described how wonderful life will be for him. I told him how sorry we were that he lost his mommy, and promised that she would live on in everything we do. Once this baby recovers and heals he will become our partner to show the world how wonderful cows are. He will open hearts, change minds, and light up the world.

We arrived home late that night. The baby was listless, dehydrated, and depressed. We settled him in and then gave him subq fluids. That perked him up a bit and a few hours later after a deep sleep, he got up and drank a bottle. Learning to drink from a bottle will take time but were off to a great start. At The Gentle Barn, we believe that emotional health is just as important as physical health. If an orphaned baby has no reason to live and doesn’t want to live, no amount of vet care will help them live. So to give them love and a reason to live, when we rescue an orphan and have to get through thirty days of quarantine, we have people with them all day and all night. My daughter and I slept with him last night, spooned him, talked to him each time he awoke, and cleaned up after him each time he went to the bathroom, just like his mom would have. We kept him wrapped up in a blanket warm and snug. When he would fall asleep he would dream of nursing and being with his mom. When he woke up and realized that his mom wasn’t there with him, the pain hit him all over again. It was so painful to witness but thank goodness we were there with him and he wasn’t alone. We’re looking forward to when the pain fades, and he embraces the joy and wonder that is waiting for him at The Gentle Barn. It’ll take time, but we'll get there!

As an organization, we are trying to recover from opening up in Nashville. We needed end of the year donations to support the two hundred rescued animals we currently have and our three locations. This was not great timing for another rescue, but when the owner of a slaughterhouse gives us a chance to save a baby, we say yes no matter what! Please consider giving an end of the year donation, we need it now more than ever. And if you have made one already, THANK YOU!!
As I drift off to sleep with our new baby in my arms, his fuzzy, fluffy fur tickling my face, and his baby sweet smell in my nose, I think to myself, “this is way better than a movie, any day!”