Bidding Farewell to a Gentleman 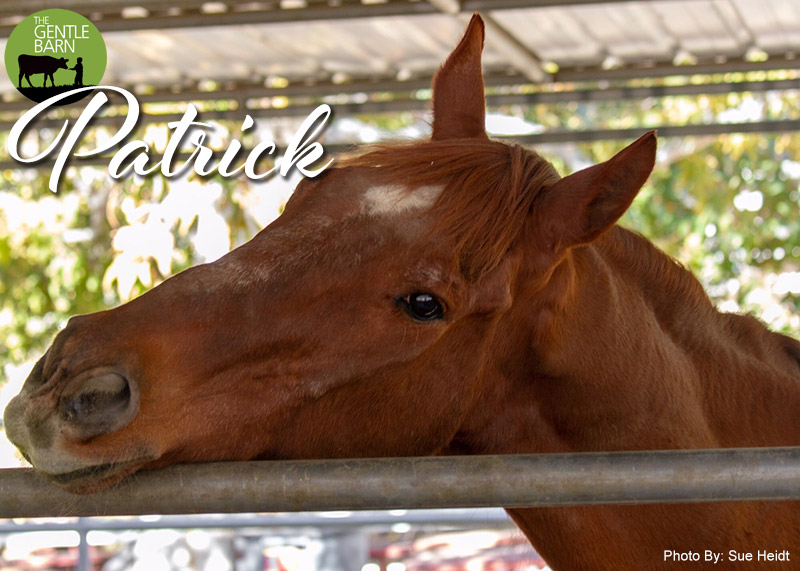 This week in California we bid farewell to our gentleman Patrick. He was 37 years old, which in human terms was equivalent to 105. None the less, it was hard to see him go. We only had him for six years but having him in our care and in our barnyard was a true blessing and an honor!

We didn’t originally set out to bring Patrick home, it was his friend Andrew that drew us out to the orange county animal care and control. But as we were loading Andrew onto the trailer he stopped and refused to take another step. Andrew kept shaking his head in the same direction over and over again as if he was pointing at something. After making sure he had no flies in his eyes or dirt in his ears, I looked at the direction he was pointing to, and sure enough, he was shaking his head at another horse. I asked the shelter volunteer about the horse that Andrew was inquiring about and was told that he was about to be euthanized. We looked at Andrew and said, “yes we can take him too”. So it was Andrew who saved Patrick’s life.

Patrick had been used up and thrown out. He was already a senior with arthritis and a sway back. We assumed that we were bringing him home to pass away with dignity. But when Patrick felt the love and purpose at The Gentle Barn he decided to stay with us for six years. Patrick was Andrew’s best friend. He bonded with our blind horse, Hiro and kept her company. He allowed children to surround him, brushing his mane and tail, and wrapping their arms around his neck. He loved bedtime cookies and ear massages. And I wish with my whole heart that he had been with us his whole life! I wish we got to see him gallop as a colt and be healthy and full-bodied as a young horse. I wish we could have prevented the damage done to his body, and to his heart. And most of all, I wish he could have lived forever!

Patrick made his transition with ease, excitement, and grateful anticipation. He was more than ready! He explained that the body that once felt the earth under its feet, felt grateful to be alive, and felt full of strength and vitality, had now become a prison. He explained that before coming to The Gentle Barn, he had to work hard surrounded by people who did not love him. With us he was given a family, a purpose, and a taste of happiness. He was extremely grateful to everyone who made him feel special. But it was time to go, and if we loved him it should be easy for us to set him free because that is what he wanted. Selfishly yearning for more time with him, but being strong for him, I buried my face in his fur one more time and inhaled deeply trying to record his smell in my mind forever. I kissed him, told him for the millionth time how much I loved him, and then nodded to the veterinarian that he was ready. He left so quickly, and he looked so peaceful once departed. At the end of the day, no matter how much it hurts to let a loved one go, this work is not about me: It is all about the animals and what they want. And today I was happy because Patrick was happy. That is going to have to be enough for me.

Since its founding in 1984 CRYSTAL™ Deodorant has been a vegan, non-toxic, mineral-based line, focused on providing products that are cruelty-free. MyCHELLE Dermaceuticals®, founded in 2000, is known as the creators of the clean skincare movement, and is a brand dedicated to developing high-end, results-driven, cruelty-free products.

Animal testing is still such a problem in the beauty industry and in personal care products. We feel that it is our corporate mission to lead a different way and that is something we are proud to have done with our brands for more than 35 years. CRYSTAL™ and MyCHELLE® are proud to sponsor The Gentle Barns Gentle 12 program for the month of September.
- Catie Wiggy, Vice President of Marketing & Product Innovation for MyChelle Dermaceuticals and CRYSTAL.