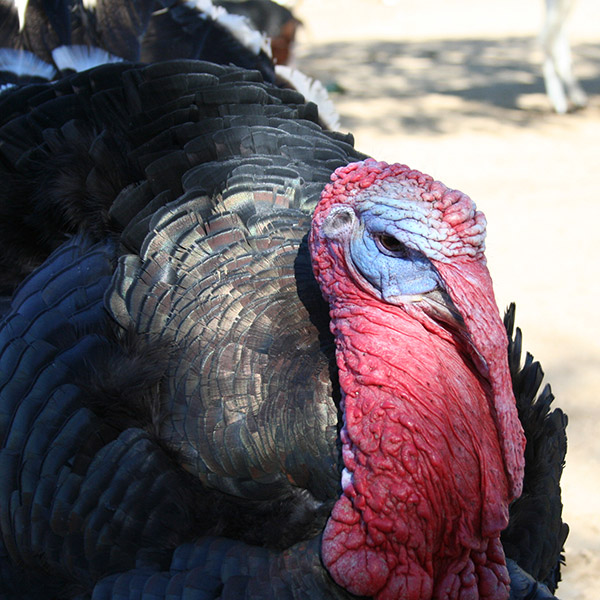 I rescued my very first turkey the November after our grand opening in 1999. I was so excited! His family purchased him to eat for Thanksgiving but could not go through with it, so they brought him to me. He was so handsome and regal that I developed a mad crush on him instantly. The man that brought him to me told me two important things: he was not smart so I should assume he does not understand anything, and, he is mean so I should protect myself with a rake while in the barnyard. I had never had a turkey before so I had no prior experience and assumed this man was the expert.

The very first night Tommy was with me, just about an hour before dark, I ushered him into the barn where he would eat and sleep at night. The next night I looked for him again at the same time, thinking he wouldn’t remember. However, I could not find him anywhere. I looked all over the barnyard: behind the barn, in front of the barn, and on the sides. I even looked over my fences to the neighbor’s yard. He was nowhere to be found. Then, I finally spotted him. Tommy was in front of his door patiently waiting for me to open it up so he could have dinner and go to bed. That’s when I learned that turkeys are smart!

For two weeks, I carried a rake with me wherever I went in the barnyard. Tommy never gestured towards me aggressively. He never snapped at me. He never even looked mean. Finally, after two weeks I put the rake down and began a love affair with my very first turkey. Tommy was always gentle, polite, kind, and affectionate. He was a gentleman through and through! Perhaps Tommy knew his previous owners' intentions versus mine? Maybe, he knew I would never do him harm!?

Tommy was the love of my life until four years later when he could no longer walk because of the genetic engineering that made him abnormally huge. I helped him out of his body while thanking him for knowing him, for gracing my barnyard with his intelligence, and for opening my eyes to the fact that we are all the same, we just look different. He taught me so much. I couldn’t help but wonder if maybe it is us who are not so smart?