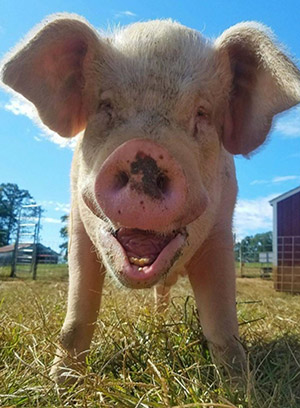 The most frustrating and simultaneously miraculous thing about life is that we can never predict it. Rarely do things happen the way we plan or expect it to work out, especially where animals are concerned. Sometimes the frailest surprise us with their will to live, and then other times life can be so fragile. Sometimes we think someone will recover just fine and they suddenly pass, dropping us to our knees, and other times we fear a devastating prognosis and they recover just fine to return home for many more years. The only way to survive it is to love with our entire hearts, for as long as we can, so there are no regrets when our loved one departs.

This last week was one of many surprises and much transition. When Adeline went in for surgery, egg bound with seven necrotic eggs, I prayed and hoped she would return home, but feared the worst. When her surgery was a success, and she was discharged a few days later, I was elated! We celebrated, cuddled, talked, sang, and spent hours together. Adeline’s will to live matched our desire to have her and she returned to open many more hearts; thank goodness!

Then we found our forever property in Nashville and announced it, first to our advisory council, staff, and volunteers, then to the public. We have only thirty days to raise the funds but everyone is very supportive. Together we’ll make it happen. Even though this is such a fantastic move for the organization and the animals, we will leave behind volunteers and guests who have become family in Knoxville. The sweetness is not without its bitterness, and we feel very grateful for our time together.

Just as the celebrations were underway on social media’s live feeds and posts, our Horton stopped walking. He had mobility issues since he turned a year, so it’s a miracle that he lived till three. Over the last two years he has had ups and downs, so we gave him a few days to bounce back, but when he did not recover, we called the vet and were told that for Horton’s sake, it was time to help him out of his body. On the one hand, we were devastated, and on the other, we were elated that we had him for much longer than expected. And I was so grateful that he passed during our visit to Tennessee, enabling us to spend so much time with him before he left.
Horton had bad confirmation from the start. He developed mobility issues at only a year old. At two he was walking mostly on his knees. And over the last six months, he seldom left his house. Thanks to great vet care, anti-inflammatory medications, and eastern herbs, we were able to keep Horton comfortable and out of pain for the entire time. Horton probably lasted longer because of the love he got from our staff, volunteers and guests, but also from his brother Henry. Henry snuggled up next to Horton when it was cold. Henry brought huge mouths full of hay to Horton in the house, before we could even get it to him, and before he himself would eat. Henry would even pick bouquets of flowers for Horton and lay them in front of him to enjoy. The two of them shared a love, friendship, and comradery that most of us only dream of. And I am so thankful that we were the ones who brought them home to share life together.

As we helped Horton transition, our thoughts turned to Henry and wondered how he would fair without his best mate. But we very quickly realized that just in life, Horton and Henry could never be separated, and Horton is still right by Henry’s side. Henry is completely unfazed by Horton’s transition. He still has a smile on his face, he still picks flowers and brings them to the house they once shared, and he still lounges in the pool as if his pal is right beside him. We can practically hear Horton snort and grunt the way he used to. Our society does not prepare us for death at all. In our culture we treat death as a tragedy and our reaction is to mourn inconsolably. But animals teach me time and time again that there is no such thing as death, and just because someone transitions out of their body, doesn’t mean they are gone. And that is a wisdom that Henry Cleary understands.

Horton always had a smile on his face and was grateful for his life and his work with us opening hearts. He enjoyed each and every day and took none for granted. And when it was time to leave a body that no longer served him, he exited with no fear, little attachment, and not an ounce of sadness. His joy, his light, and his magic still exist at The Gentle Barn beside his brother and for all of us to feel, when we are seeing with our hearts. Please help us move to Nashville to save many more animals, open many more hearts, and make many more smiles. Please donate in memory of Dudley, Horton, or anyone you loved, as their spirits still shine brightly on this planet, helping us all in spirit to connect to each other and to the love inside of us!

A message from Catie Wiggy, Vice President of Marketing for MyChelle Dermaceuticals and CRYSTAL:

It's unfortunate that animal testing is still such a problem in the beauty industry and personal care products. Throughout September, MyCHELLE and Crystal are proudly running cruelty-free campaigns featuring our sponsorship with The Gentle Barn to help spread awareness on animal testing. We believe in giving back to the people and places who need it the most and helping all find that bigger purpose in life that motivates every one of us to keep getting up, showing up, and making a difference whenever we can. We are proud to partner with like-minded, grass-roots organizations like The Gentle Barn, who are in the trenches, working hard to innovate, problem-solve, inspire, and uplift each other every single day. Are you ready to join us?