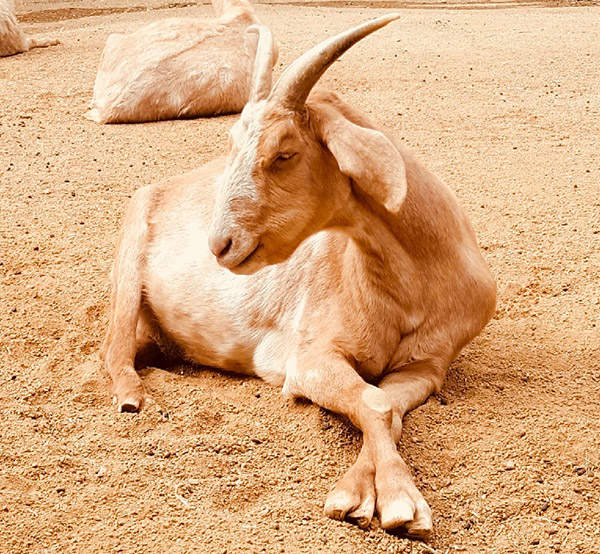 Jay and I finally got back to Los Angeles this week, after being at the Tennessee location for almost a month. In Knoxville we fixed fences, shored up the muddy pig area, created a ramp to dump the animal waste and bedding, got captain through quarantine, and just before we left, watched Captain romp and play with the other cows, literally jumping for joy. We worked most of the time in the rain and by the time we left we were good and sick. We got home at one in the morning and figured we would sleep in, cuddle with our puppies, spend time catching up with our kids and animals, and get our strength back. Life, however, had other plans...

A few hours later, just at daybreak, we got a call from our animal care staff saying that there was something terribly wrong with our goat Ryan. I jumped out of bed, put my boots on, and ran out to the barnyard in my pink, plaid pajamas. I found Ryan laying on the ground, in a puddle of his own pee, with his back legs splayed out, shivering. I called more staff to help us, and together we picked Ryan up with a blanket as a sling and brought him inside the barn on soft, dry, warm bedding. We covered him with a blanket and called the doctor. The first veterinarian said he could not come out till later but told me what to give Ryan for the pain. After giving Ryan his injections, I called the next vet who said she’s on her way. While I waited for the vet to arrive I held Ryan’s head in my arms, kissed his face, and sang to him; it was keeping us both strong.

We have rescued many animals with spinal, pelvis, and back issues, but I could not recall any of them with the kind of pain Ryan was in. As we waited for the vet to arrive he started trembling with what seemed like seizures and crying out; this was not good. We called another goat expert who helped us over the phone to bring Ryan’s legs in underneath him to make him more comfortable and confirm that we might not be looking at an injury at all. I wanted to cry and panic, but I held myself together, even if I had to bite my own lip to stop myself from crying. When an animal is in crisis it is not about me; there would be plenty of time to cry later. Staying strong, positive, brave, and helpful for Ryan was my only objective.

When the veterinarian finally arrived, she did tests and ran diagnostics and could not figure out what was going on. She said that it didn’t seem like a fracture at all, but rather something neurological going on. She consulted with the other two vets on the phone, and they all agreed that it seemed neurological, excruciatingly painful, and untreatable. In the hour that the doctor spent trying to help Ryan, he seemed to be getting worse; seizing every minute or two and was getting weaker and more disengaged. I closed my eyes and connected with Ryan, asking what it felt like and what he needed. And I heard the words in my head over and over again, “get me out of here, get me out, get me out, get me out.”

The doctor took over my spot at Ryan’s head, and I sat a few feet away from him. Disinterested in the medical procedures with needles and injectable, and much more interested in connecting to Ryan, I closed my eyes and made myself available to hear him. I told him that it was an honor and privilege to know him and care for him. I praised his sense of humor and the joy that was always in his eyes. I recalled the first time I met him and how tiny he was, even though his spirit was so huge. I smiled when I remembered that when he first came to us, all the animals were sick. We had to give them daily injections for almost a month. Many of the animals came with tiny nursing babies, and over time we would hold one of them still, Ryan would dive under her and nurse, taking advantage of the situation, even though he had his own mom. I almost laughed out loud when I recalled the thousands of times that I gave out Sun Chlorella Rejuv A Wafers to the goats and sheep and how Ryan would come back for more, insisting that the treats were all his, not wanting to share. I told him how much he was loved. I told him that he would feel relief in a just a few minutes.

After eight hours of being home, Ryan passed away in my arms. After he breathed his last breath, I allowed myself to shed tears for the first time. I sat there in the straw, with his wonderful musty smell still in my nose and on my hands and sobbed. I ached to feed him one more treat. I yearned to open a door with him busting into it, or carry a bucket of oats and have him knock it out of my hands onto the ground. It’s amazing how the things that drive us nuts about someone are the things we miss the most once they are gone. Ryan was more like a dog, or a baby. He was smart, funny, full of life, and had a great sense of humor. I absolutely loved him, and so did everyone who ever knew him!

I realized something profound once the tears dried up: we were in Tennessee for three weeks. Depending on travel arrangements, we could have missed Ryan’s transition by a day or even hours. How blessed were we that we made it on time?! Then I remembered how I always thought that Ryan reminded me of my goat Bambi and joked that Ryan was Bambi reincarnated. Bambi passed away suddenly while I was out of town and I was not there when he died. It has been one of my greatest regrets. I was here for Ryan, though. Was that my second chance to walk Ryan home, to hold him, and to hand him over to the angels? Suddenly I felt so very blesses, and so very grateful! I got to love him, care for him, watch him grow, laugh with him, meditate with him, have him as my friend, and then walk him home after a life very well lived. Thank goodness I didn’t miss that! Thank you, Ryan, for waiting for me!