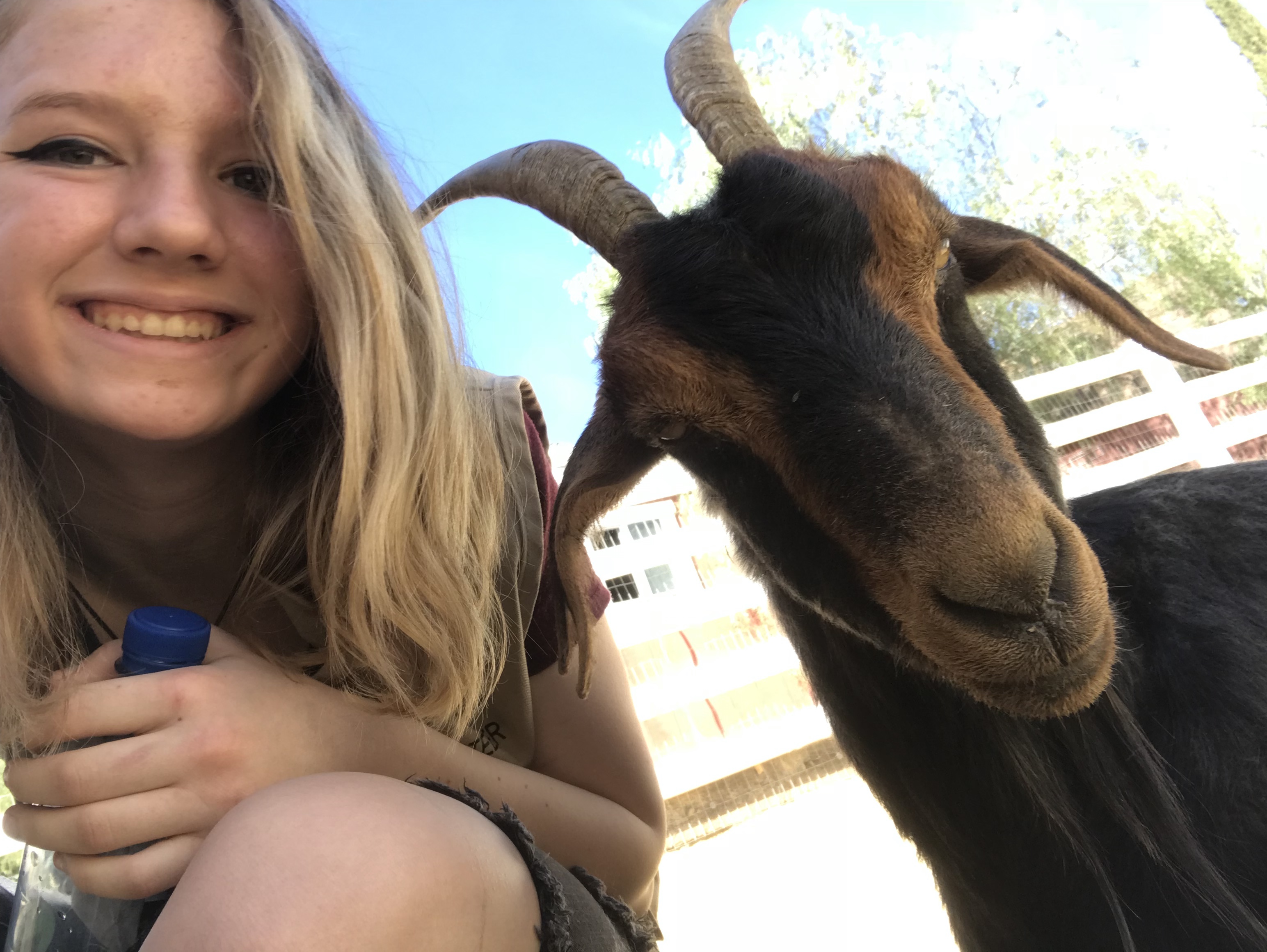 As I wrote about in my book, My Gentle Barn, there are three reasons why animals come to us: To be restored to health and well-being and live the life all animals deserve, to transition with dignity in the hands of people who love them, or to learn life lessons. When animals come for the latter, they typically do not stay around for long after they have achieved what they have come to learn.

Reina was rescued from an extreme abuse case where she spent every day preparing to die, watching others be killed in front of her, and trying to survive. She lived in constant terror. Once we brought her home to The Gentle Barn, it took her years to accept our love, to trust us, and to exhale finally. At first, she would not even lie down in the barnyard if there were people nearby. But after about a year she started to relax and even remain laying down when we would walk by. She finally took treats from our hands, which ultimately led to us petting her face. And after five years Reina finally learned that she was safe, forgave the human race, and let us pet and hug her. She even got a docent who fell in love with her and helps her interact with our guests when we are open on Sundays. And as she progressed and healed, as overjoyed as I was, I could not help wondering how much longer she would be here with us.

This week we noticed that Reina was not finishing her grain in the mornings and was losing weight. The weight loss caused her to get cold during the night, and we found her shivering in the morning. We immediately got her a winter coat and a heater, which helped, but why was she losing so much weight?! Our veterinarian confirmed my worst fears when he examined her. He said that it was her time, and our job is not to cure her, but to keep her comfortable while she makes her plans to transition. The doctor gave her antibiotics to protect her from secondary infections, steroids to increase her appetite, another shot to increase muscle tone, and B12 for energy. We are giving Reina Sun Chlorella Gold three times a day to boost her immune system, and grain three times a day so she can eat slowly at her own pace. She has all the alfalfa hay she can eat. Reina spends the days in the sunshine with her friends and family, and I come out at night once it cools off to put her coat on and turn on her heater. She curls up on a patch of fluffy straw that I made for her and looks at me as if to say, "Don't worry about me, I'm comfortable and ready to go home."

At first, I felt that familiar pang of sorrow that I have felt for every one of our animals when they pass on. I felt desperate for a moment and wanted to call the vet and beg him to do more studies or try more treatments to save her. I wanted to beg Reina not to leave me. I wanted to cry to my husband about how sad I felt. After a few minutes, I caught myself, regained composure, and saw it from a different perspective: Reina was a champion and a hero! She was surrounded by the absolute worst of humanity and life, but she survived. She was horribly sick when we saved her, but she recovered. She was terrified for years, but she overcame and forgave. Then, years later when she was ready, she let her past go and opened her heart to love. She did it! She deserves to go home to the thundering applause and standing ovation of angels! She deserves to be congratulated and praised. With newfound resolve I made her this promise: I will keep her comfortable and cared for until her last breath. I will share her story with anyone who will listen. I will tell her over and over and over again that I am so proud of her! When she finally goes, I will let her go, not with tears or sorrow, but with pride and honor, that we played a small part in her journey and watched a goat become a queen in our barnyard!