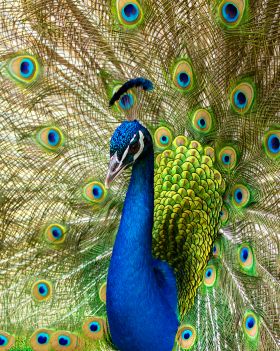 Life is always expanding and moving in and out of form. With as many animals as we have, the majority seniors, the circle of life is always presenting itself to us at The Gentle Barn. As Christmas moved into the New Year and the calendar leaped forward to 2018, we said farewell to our beloved Jewel as he made his transition out of his magnificent body. We do not know exactly how old he was, as he showed up as an adult, but we were blessed with his presence for a decade, and we feel deeply honored to have known him and to have served him.

Jewel showed up just before Christmas ten years ago. He was wild and slept in the neighbors’ trees. When he discovered that we fed breakfast at 7 am and dinner at 4 pm, he started showing up for meals. I was thrilled to feed him! He would show up precisely on the hour and I always had a bowl of food and treats waiting for him. After a few months of him coming and going, I opened our barnyard gate one day and invited him in. He looked around, walked in, and has been with us ever since.

Jewel would fly up to our second story window in the mornings and watch us get dressed. He would wait for me in the garage each evening for a bedtime snack of blueberries, grapes, and greens. He would follow me into the feed room for Sun Chlorella Rejuv A Wafers each day. He went for an evening stroll to visit the horses each evening. He even came into the house one day, years ago, when it was pouring rain. We watched TV together, shared lunch, and when the rain stopped, he went to the front door, thanked us, and left.

Jewel knew exactly who he was, was clear on what he liked and disliked, and made no exceptions or apologies. He demanded attention, but didn’t like to be pet. He flashed his colors, but needed everyone to know he was male. He liked the female volunteers, but would attack the men. He demanded treats, but would kick me when the treats were done. He chased our emu relentlessly. He woke us up in the middle of the night with his loud catcalls. We were all madly in love with him! Jewel showed off to anyone and everyone, even sleeping pigs, indifferent lizard, and busy chickens. Jewel always got the most applause from us humans who could not get enough of his displaying magic. Sometimes he would turn around and shake his tail feathers for hours as we watched mesmerized.

Jewel was wild and did as he pleased. He showed up when he wanted and he took his leave with no warning. He knew he was a king and was grateful that we gave him a thrown and an audience. He is now shining brighter than ever, more vibrant and royal that before. He is a king of kings and we celebrate his reign at The Gentle Barn as a gift, honor and a blessing. After all, it is not every day that we are chosen by a peacock! Jewel will be deeply missed and will show off in our minds forever.

At The Gentle Barn the circle of life can sometimes be painful, but with every farewell comes a new hello. It has always worked out that way and always will. So with Jewel shining in other worlds, I just cannot wait to see who comes waltzing into the open spot in our barnyard to breath new life and hope into all of us.