Holding the Space For Them 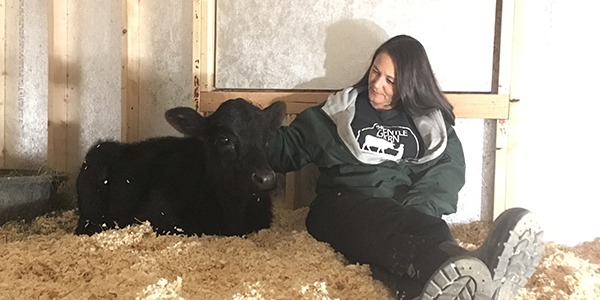 As you may have seen on social media, we have a new baby boy here in CA. Ferdinand was so scared and sad when he first arrived, but with time, patience, and lots of love he is coming around to the joy that has been waiting for him here. He is finally starting to explore and play. Each morning after breakfast he plays with the wheel burrow and knocks it over. Then he walks around the yard collecting sticks that he carries in his mouth and chews. Then after a nice long nap, Ferdinand plays ball with the volunteers and jumps, bucks, and spins around chasing his new toy. He is beginning to play with us by head bonking gently like cows play. The other day he snatched a paper from my hand and ran around the yard with it in his mouth, jumping and running for joy like a giant puppy dog.

It was a long and involved process to bring Ferdinand from sorrow and fear to joy and trust. My daughter Cheyanne and I slept with him for the first week, never leaving his side for a solid seven days. We stayed until he was less defensive and scared, and we could pet him. Then we had volunteers stationed with him, taking four-hour shifts throughout the day and night, so he was never alone. Every morning I would mediate with Ferdinand. I would sit quietly and still, breathing in and out deeply. As soon as I would begin, Ferdinand would stop what he was doing, lie down, close his eyes, and join me. I would paint the picture of what his life would look like, in my mind. I would visualize the fresh food and clean water he would have every day. I would picture the friends that would play with him and the people who would bring affection and attention. I would imagine his body leaping in the air, running and playing with joy. I always ended by inviting Ferdinand to step into this life whenever he was ready.

Sometimes those in recovery forget who they are, or often they are in so much pain that they cannot see the peace in front of them. To move them forward out of where they are and into the life we have designed for them, we must hold the space for them to step into when they are ready. We do this process for every single turkey who eventually becomes a cuddle turkey, for every cow who in time learns to gives out hugs, every chicken who ultimately becomes a lap chicken, and every feral animal who finally learns to trust. If we see it, they can be it.