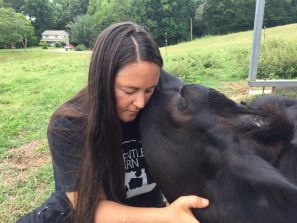 When I was a child, it was so clear to me that animals were angels among us. They were here to love us unconditionally, witness us, and mirror back to us that we were loveable and perfect just the way we are. It was also clear to me that the people around me didn’t see animals the way that I did. My parents, siblings, friends, and the community could not see them as anything other than disposable objects to eat and wear. My brothers would torture bugs in front of me just to make me cry. My friends at school would laugh at me for mourning over the loss of a beloved pet. The intelligence and the affection of all animals were so clear to me, and I never did understand why people seemed so blind.

When I was eleven years old, there was a chicken brought to school for the day for whatever reason. She was in a cat carrier in the corner of the auditorium trembling with fear as the kids ran, played, and laughed. Not one of those students even noticed that she was there, let alone saw how terrified she was. As the avid animal lover that I was, I zeroed in on her pretty quickly. I pulled her out of the crate, smoothed down her feathers, and cradled her in my arms. I told her that she was safe and not alone and that I would protect her. She settled right down in my embrace and finally stopped shaking. After several minutes the principal rushed in, told me that the chicken had to get to the slaughterhouse, ripped her from my arms, and ran out of the school with her. That was the day that I learned that chicken the animal is the same thing as chicken and rice, the meal, and I have never eaten animals since. Why, though, out of hundreds of students was I the only one to see her?

Many years later I was running an errand in town, and I drove past a petting zoo I had never seen before. It was packed with animals and people, so I parked and went inside to check it out. There was that same phenomenon again: The place was full of suffering, and no one could see it! The goats and sheep had overgrown nails and could barely walk. There were dead animals in cages. It was over a hundred degrees, but the animals had no water. The ponies were going around and around in circles for hours with no break, carrying kids who were way too big for them to carry, and they were beaten if they tried to stop. And the people were smiling, and cheering, and taking pictures like it was the best day of their lives. Not one guest besides me seemed put off by the filth, abuse, neglect, and misery right in front of them.

When I finally started my dream and opened The Gentle Barn, I was approached by animal control to take a pig who had escaped from a slaughterhouse. She had been in line to be killed and somehow found a way through a fence to run down the street. Susie Q had seen the slaughter in front of her, heard the screams, and left her family behind to save her own life. It was no surprise that she was depressed when she arrived. Susie Q lay in the corner of the yard unwilling to eat, drink, or get up to go to bed that first night. As it grew dark outside and the air cooled down, the other animals who had been sitting around the barnyard, started getting up to go to bed in the warm barn for the night, leaving Susie Q alone in the yard. Our cow Buddha was the last to leave, walking slowly towards the barn. She got to her favorite spot where she always slept, and just before she was about to lie down in the soft, warm straw, she looked back across the yard and saw Susie Q lying there all alone. Instead of lying down, Buddha turned around and went back across the yard to lie down next to Susie Q. Buddha staid next to Susie Q for the next six days! Finally, because she now had a friend and a reason to live, Susie Q got up on the seventh day and ate, drank, and rolled in the mud. Buddha and Susie Q were best friends for the rest of their lives. If animals have empathy, why do we seem so devoid of it?

All across the nation, in every school, there are anti-bullying campaigns, pamphlets, and conversations. It is talked about in every classroom, in every assembly, and at home by the parents. We are shaken to our very core when a teen goes to school with a gun and shoots up his class, or a man targets a concert, or someone guns down a church. It is brutality that we cannot fathom. Many of us are lost and feel unsafe because of it. I say, however, that as long as we have violence and brutality for breakfast, lunch, and dinner, it will only get worse! The definition of a bully is “a person who uses strength or power to harm or intimidate those who are weaker.” Aren’t we all guilty of that?! To test products on animals and cause them to suffer or go blind, is to bully animals. If we buy those products, aren’t we bullies too? To take babies away from their moms so we can take the breast milk away for ourselves is being a bully. If we are paying for those dairy products, aren’t we bullies too? To kill an animal who would escape if given the chance is being a bully. If we buy the meat, aren’t we bullies too?

When we have a barbecue for our friends and family, and everyone is having a great time, laughing and smiling, but there is an animal on that grill who suffered and died, and we don’t see it, aren’t we the same as the blind people at the petting zoo? If we celebrate holidays by killing billions of birds, rejoicing, dancing, giving thanks, but we are blind to the suffering of the animal in the center of the table, aren’t we the same as the folks at the petting zoo? Are we blind, or do we see the suffering right in front of us? When we see it, what are we doing about it?

When we try to evolve, when we don’t bury our heads in the sand, when we see with our eyes wide open, when we have empathy for others, and when we ask what we can do better, that is what will bring peace to our families, our communities, and our planet. I am thankful for all of you who allow us to rescue and save the innocent every day. I am grateful that you enable us to help children, animals, and adults. I am grateful that you love animals with me. Together we will change the world! Happy Thanksgiving!