An Excerpt from My Gentle Barn: Prologue

When I was a child in St. Louis, there was a field behind our Orthodox Jewish synagogue that held my attention far better than what was happening inside the sanctuary. While the women sat in their segregated section and gossiped for the entire two-hour service, I would squirm in my seat, unable to follow the command to sit still and be quiet. Eventually, I would tell my mother I had to go to the bathroom and instead would slip out the back door of the temple and into the field. I would crawl through the tall grass looking for beetles and giant grasshoppers. I would tunnel through the bushes, hollowing out hidden forts. Sometimes I’d just lie in the grass and watch the clouds float across the sky. The time would pass so quickly I’d end up scurrying back to the temple right when the services were ending, trying to brush the burs and foxtails off my dress and tights as I ran.

One Saturday in the fall, when I’d snuck out into the field, I noticed some big butterflies glimmering in the sunlight as they flitted from one weed to the next. I lay down in the field to get a closer look at their orange wings struck through with black veins. When I rolled onto my back I saw that the sky was filled with them—their wings, tiny stained-glass windows lit by the sun. Lying in the grass transfixed, far more still and quiet than I ever was in temple, I felt a tiny touch on my arm, then on my hand, then on my face. One after another, butterflies were landing on me, until I was covered entirely, head to toe—a mirror of the orange, fluttering sky. 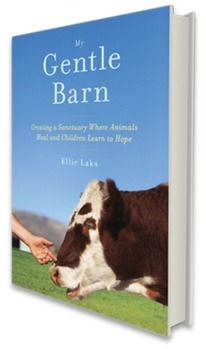 In that moment, I felt—for the first time in my young life—a sense of peace and stillness inside me.

That stillness and well-being never came to me from being around humans—not at home, not at school, not with the few friends I had. Animals—whether a tiny winged insect or the horse at the stables down the road—were the only ones who could provide me with that depth of calm and happiness. They ushered me through my childhood and through my life—calling me back again and again to a place of peace and purpose.

Years later, when I went on to start the Gentle Barn—rescuing, rehabilitating, and offering sanctuary to abused animals—many people misunderstood what it was all about. At the beginning, some viewed it as a hobby or an obsession. With time there were many who saw it differently and thanked me for rescuing all these animals—viewing my work as an act of selfless devotion.

To all of those people, I wanted to say, "You don't understand. I'm not saving the animals; they're saving me."

Now there are those who understand even this, for they, too, have been saved by the animals. Thousands of at-risk and special-needs kids who have participated in our youth program—as well as the adults who have come to volunteer—have been touched and transformed by the animal residents of the Gentle Barn.

What started off as a personal quest for peace and wholeness has blossomed into something so much bigger than that little girl covered in butterflies ever could have imagined.

Shop now to get your copy of My Gentle Barn!