In Loving Memory of Grace 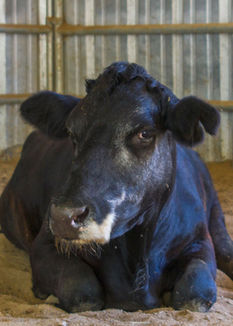 There are three reasons why animals come to The Gentle Barn: so they can heal and live the life all animals deserve, so they can die in the arms of someone who loves them with dignity and respect, or so they can learn a life lesson. Just like us, animals often have things they must learn or overcome in this lifetime. Some must learn about courage, trust, or joy. Grace came here to learn forgiveness.

Grace was impregnated every year and each year her babies were taken away from her while she screamed, helpless. The last year she was bred she was crippled with a broken pelvis. Instead of getting the help she needed, she was kicked, whipped, and beaten so she would get up. Grace developed a hatred for humans so deep that it consumed her.

When we brought Grace home, it took months, but we finally healed her broken back and got her walking again. Healing her heart, however, would take much longer. The first year we did not touch her at all except for her weekly acupuncture and massage treatments. We did not want her to be defensive; we wanted her to know we didn’t want anything from her, so we left her alone. That strategy enabled her to relax and know that we would come and go but would not bother her. The second year I started to pet her, not anyone else. I would start to scratch her and she would swing her head in an attempt to get me to go away, but then she realized it felt good and would hold still for hours so I could pet, massage and brush her. The third year it was time for Grace to start trusting other people, so my daughter, Molli, volunteered with her each and every Sunday and bonded with her. With the help of Molli, Grace started selecting 2 or 3 people each Sunday that she would allow to pet her. It had to be on her terms, but she was trying so hard to allow people in. Grace continued to trust more and more people to pet her until one day we realized that she was just like the other cows: soft, open, vulnerable, humble, and allowing guests to hug her. During the time Grace was here, she went from angry and shut down to an ambassador who anyone could pet or hug. Her story made our guests cry and relate to her and she helped so many people understand what happens to cows and how they suffer.

When an animal has learned their life lessons and done what they have come here to do, after enjoying their victory and achievements for a while, it is time for them to go home, to transcend, and to be free. So as Grace achieved more and more vulnerability and openness, her body started falling apart. We have done our absolute best to keep her comfortable and mobile but we knew that there would be a time when she would be ready to go. Last Sunday Grace hosted hundreds of guests. She allowed each and every one of them to hug, brush and take pictures with her. She was warm and loving to all. But she didn’t get up that day, or the next, or the next. We tried medicine, we tried lifting her, we tried begging her. But Grace’s legs were weak and her body was tired. Our veterinarian came out to examine her and told us what we didn’t want to hear - that Grace was no longer able to stand and it was time for her to make her transition.

My daughter, Molli, and I held Grace’s head in our arms as she left. We thanked her for her great work and praised her for her accomplishments. We told her how brave she was and how hard she worked at overcoming her past. We told her how proud of her we were and that we would never forget her. We told her that she would forever inspire all of us to work as hard as she did to move on from our pasts. With all the other cows gathered around us, the moon and stars as her guide, Grace took her last breath and slipped quietly out of her body. We imagine her going home to her angels receiving her with a standing ovation for a job well done.

We will always miss Grace and ache to hold her just one more time. We are so proud of her and could not have asked for a better life and journey for her here with us. If you knew Grace and loved her like we did, thank you! Her memory will live on in all of us!