I bought a cow. I said words I never thought I’d hear myself say, “Mrs. Duncan, I’d like to buy a cow.” Then I reached into the back pocket of my jeans and handed the cattleman’s wife $300 dollars.

I owed a debt to a calf I’d met as an eight-year-old child. I reached my hand out to pet him and he nursed on my finger. I remember, for the first time, having awareness that all life was precious and silently promising him, “I will never eat animals.”

I broke my promise. I grew up and I forgot. I ate a lot of hamburgers. My life got busy. My heart hardened. I married, had kids, and a few shattered dreams. But slowly, recently, I’ve begun to remember.

My ten-year-old daughter hatched her beloved pet rooster, Henry, from an egg. She asked, "Is chicken, chicken?!" "Yes", I said. “I’m never eating meat again!” She declared. And, she hasn’t. Inspired, neither have I.

I’m a creative person by trade but lately I spend most of my time as a Burbank housewife. A few years ago I rescued a racehorse. My time with him is quiet, therapeutic. It’s my alone time, away from the challenges of marriage and motherhood. I board him on a beautiful property owned by cattle-ranchers. They are good people. They’re honest. They work hard. My horse is very happy in his big pasture. I know somewhere there are bigger pastures where the cows roam. I imagine them grazing happily as a herd and basking in the sunshine not knowing they will one day be sent to slaughter. Fortunately, I never see that part of the ranch. I put it out of my mind. I ride my horse, groom him in the big barn, and I leave. 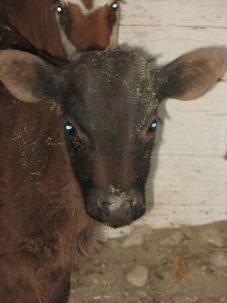 One day I walked into the big barn to get my horse some grain and there, huddled together in the corner of the breezeway, were two baby calves. A little brown boy and a little red girl. A caretaker at the ranch told me both of their mothers had died. She said that one was orphaned first and the other calf's mother allowed him to nurse for a few days, and then she fell down a ravine leaving both orphaned.

I reached my hand out to pet them and the little brown calf nursed on my finger. He put his big, wet, brown nose right up against my face and licked me with his scratchy tongue right on the mouth. He laid his head in my lap. He allowed me to rub every inch of his little body. Like a dog. He loved me fearlessly and fully and my heart melted. Tears rolled down my cheeks as I reconnected with a long, lost part of myself. The little red calf, the girl, could not have been more different. She was terrified. She would not allow me near her. She would be easier to put out of my mind.

Driving home, I tried not to think about them. I gave myself a pep talk, “They’re cattle ranchers. This is their livelihood. This is what they do. Mother cows die all the time. Don’t interfere. Turn away. They’ll be raised up and reintroduced to the herd, then sent off to slaughter with the rest. That’s life on a cattle ranch. Let it go. You can’t save them. Turn away.”

I took a deep breath. This rescue was not going to be easy. I was frightened. I was acting alone. I would have to lie. First, to my husband, who is a big meat-eater from the mid-west, then to the cattleman and his wife, and then I would eventually end up lying to the animal rescues trying to help me.

But, I could not stop thinking about the little brown calf. He haunted me. Lines from Titanic kept running through my head. “You jump, I jump, right? I’m too involved now”. I had to do something. I had to save him. I learned that the moment you commit to a rescue, you instantly have a preferred outcome. You’re immediately, passionately, invested. I was terrified. What if things didn’t go my way? Being a first-time cow rescuer, I was also tentative. Just one calf, I decided. I didn’t want to ask for too much. One calf would be easier to place. Negotiations for one calf I could handle. Besides, the little red girl hadn’t captured my heart. She hadn’t nursed on my finger. She didn’t even look me in the eye. She would not haunt me. But she did. A little. She seemed like she needed love and kindness even more than the brown one.

I contacted the cattleman. (The day I made that call, the Fisher-Price Barn stopped mooing at me.) I told him my daughter wanted the calf as a pet, that one day we would have our own farm. I wasn’t asking for a favor. Cattle are his livelihood. I asked if he would consider selling the calf to me. He said market price at his current weight would be $300.00 dollars. I don’t have a lot of money but that seemed like a bargain to save a life. I took cash from the ATM hoping my husband wouldn’t find out and promptly put it into the hands of the cattleman’s wife. I now owned a cow! I was terrified.

At the suggestion of a friend, I sent emails, along with a picture, to farm animal sanctuaries: Animal Acres and The Gentle Barn. Animal Acres responded first. They said they might have room but needed to inform me of their strict policy never to accept a calf if money had been exchanged. They could not, in good conscience, allow money to go back into the cattle industry. “Of course,” I said. “I understand. I will see if I can get the cattleman to release the calf to me without payment.”

I thought about Schindler and how he lied to save the Jews. When I arrive at the Pearly Gates I’m hoping my devotion to saving lives far outweighs telling lies.

By the time I heard back from The Gentle Barn I was so nervous and jumpy and desperate I just assumed they had the same strict policy.

“I’ve managed to persuade the cattleman to release the calf to me.” I blurted out to a nice man named, Jay, with as much conviction as I could muster. “We can take them both” Jay said on the other end of the phone. “Are they safe?....My wife, Ellie, is very concerned."

“Yes” I said. “For the moment they are safe…..excuse me, did you say you could take them both?”

“Yes. In the picture there was another calf in the background, right?...a little red one?”

My heart raced. He spoke words I could never have imagined. Both?! They could stay together? Forever? I would no longer have to put the girl calf out of my mind? She could be saved as well?!!

My voice trembled as I tried to hold back the tears of joy welling in my chest, “Ummmmm……I’ll see if I can get the cattleman to release her to me…..but…umm….I’m not sure I can do that without…umm…money being exchanged.”

“Wer'e here to help you.” Jay said, with a soothing voice full of comfort. “Everything’s going to be okay. We can pick them up on Tuesday.”

I hung up the phone and burst into tears.

I then drove to the ATM and withdrew another $300.00 for the cattleman’s wife. In the intensity of the rescue money became irrelevant. Saving the calves was all that mattered. Besides, that will forever remain the best, $600 bucks I ever spent!

I had never done anything like that before. I felt like the little, Burbank housewife going up against the big, strong cattle rancher. The negotiating was a bit more dramatic at times than I am able to describe here. It was scary, on many levels and for many reasons. My primary concern was that communication could break down at any moment and the calves would be doomed, or that I would find myself owning two calves and have no idea what to do with them, or my husband would find out and his judgment or criticism would undermine my resolve and determination.

I had no idea this random place I was referred to called, The Gentle Barn, had a huge circle of love and support. Once the calves arrived and pictures were posted on their website I sat at my computer, astonished, weeping, overwhelmed, as day after day I read post after post full of encouragement and joy and support. I marveled at how these two little calves, saved by the Fisher Price barn, could so powerfully move people all over the world. I was no longer alone. I was no longer crazy. There were thousands of compassionate hearts out there just like mine. It was beautifully emotional to follow on Facebook as their names were decided in a contest raising over $1,000 dollars:

They now had names. (Named to honor the memory of loved ones.)

They had a forever home. Together.

I wanted to write this down because I didn’t ever want to forget again. I didn’t want to forget how this all happened. I didn’t want to forget why I am a vegan. But most importantly, I didn’t want to forget the importance of turning compassion into action. I want to remind myself and anyone who reads this, don’t turn away. Be brave. If there’s something you can do, however small, to change the world or save a life, do it. All working together, one by one, little by little, that’s how we do it. You matter. Some people do great work on a grand scale. For me saving, one small brown cow made a difference.

Finally, and most importantly, I wanted to write this as a tribute to Johnny. All credit goes to him. Gentle, mighty, miraculous Johnny, who showed me that we can reach higher and are capable of so much more than we realize. He is a hero. Not only did he save himself with the power of his love and unique personality, but he saved Dakota Rey and me too. In his short life he had every reason to be afraid, he'd lost both his moms, yet he remained fearless. He had every reason not to love yet he never stopped loving. Even toward the humans who only saw him as a food product - with the eventual intent to kill him - he gave love. He gave trust. He gave kindness. He remains generous and openhearted. What a great gift to the world. Because of the amazing work of The Gentle Barn his message can now be heard. He is able to help children who have lost their parents, like he did, or troubled kids who are shut down and in pain, he helps them to feel again, to open up their hearts and find the long lost part. Just like he did for me.

We have chosen to work with The Gentle Barn over the years because we have been able to personally see how much love, care and dedication Ellie and Jay’s team give to their mission. I really feel like they are kindred spirits, and I am always so proud to be a part of anything they do. It is rare for people to have an opportunity to look a cow in the eyes, give it a hug and see that this is a sentient being. It is meaningful work. --Brook Harvey-Taylor