The Gentle Barn: The Inside Scoop 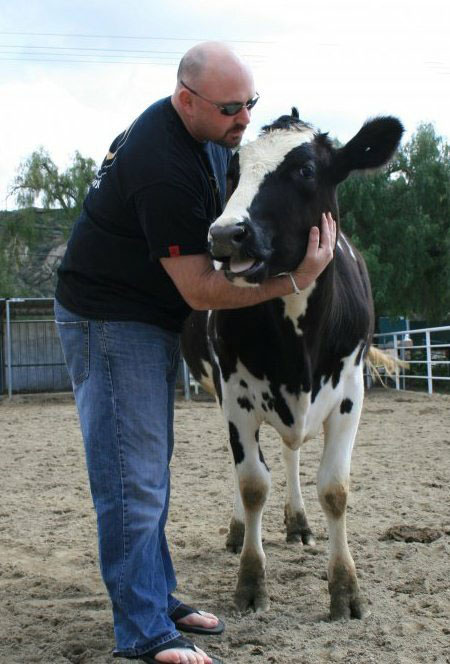 My journey started in 2007 shortly after having major back surgery. I was sitting around the house not doing much when I saw my neighbor who was battling cancer leaving for the day to volunteer at Walk For Cancer. As I sat there I realized that surely there is something more productive I can do then be a bump on a log in my house all day, but what? I wanted to do something with animals, kids, and special needs people. I recently saw a picture of my uncle who is special needs riding a horse and it moved me that he was having so much fun. The next day I received a call from a friend who worked at The Gentle Barn. I had heard of The Gentle Barn but had never been. She knew of my love for all animals and asked if I would be willing to baby-sit some sick calves from 10 pm to 2am. They were recently rescued from the veal industry and needed constant attention as they were suffering from pneumonia, skin fungus, diarrhea to name a few. This is where the old me would have said, "Well let me think about it" however, I had recently read the Celestine Prophecy that talks about synchronicity and immediately I said YES! I thought oh my god what have I done, I know nothing about cows. I had only had two pets because my parents were afraid of every animal. This was really rough because I loved animals more than anything in the world. My adventure was about to begin.

I received a phone call explaining what I had to do that night for the babies and was told someone would be there to show me as well. I arrived and sure enough there was a volunteer to show me all I had to do. Granted most of the babies were sleeping so the first half an hour was quiet and calm. I was a meat eater and never thought of cows as pets or loved ones. These calves were without a doubt the cutest most loving creatures I had ever met. Their deep, dark, full eyes were so embracing and loving I was hooked immediately. Soon after Jay came down to welcome me in the pitch black and see how I was doing. Soon after that Ellie came down to do the same and fill me in on their journey up to that point. I was horrified to hear all they had been through and they were only a month old. And by the way this was at 12:00 am! Wow these people are really committed, I thought.

The calves were so sick, constant diarrhea, coughing constantly, horrible pink eye, large fungi all over them, yet so loving and willing to let me help them. There was even one that was blind who would only walk in circles and bump into everything. It was killing me to watch her do this.

How cruel can we be as humans to do this to these animals? And this is only five cows out of millions everyday that go through this. "I must help,” I thought and from then on I have been devoted to saving these animals.

The calves were Faith (who is blind), Courage, Star, Forgiveness, and Crystal.

I started coming everyday after my 9-hour workday to help heal and love these calfs. Eventually I was coming 5 or more days a week. After a few months they started getting better and were so much fun to watch run around and play. I was taught how to take care of their ailments and soon they were healthy calves, except one: Faith, as I said, was blind and after being a veal crate so long all she could do is walk in small circles. It was gut wrenching to watch. I had to do something about this. So I started working with her with treats calling her name so she would break her circle and walk straight. Before long she was walking around like the other calves. Even playing with them, which she had never done before. You couldn’t even tell she was blind. I was really enjoying this work, who would have thought I could do this?! At the same time my job in sales was becoming so anti climatic, maybe this was a sign that I needed a change in my life.

I became close friends with Ellie and Jay. I felt like family. Shortly after I was asked if I could help with some other animals and of course I said yes. Before I knew it I was volunteering with all the animals, helping them heal and teaching them to trust people.

One day I sat in on a special needs adult group with Ellie, it was called Get Out. They would take these adults out to places like The Gentle Barn, Disneyland, etc. and let them experience things that they never would be able to otherwise. There was one older man probably 70 years old. He wouldn't talk. He had an Ouija board and would try to spell things out to communicate. I brought down one of our chickens, Mario, for them to see and pet. I placed Mario in his lap in his wheelchair and he said CHICKEN. My heart swelled. He doesn’t talk, they said. He pet the chicken and smiled. They said it was a breakthrough. This was the moment I knew this is my life's calling. The connection between animals and those who need help. How amazing this would be to be a part of this.

Sadly shortly after we heard that the man had passed away peacefully. I thought how great was it that he got to smile and experience love just prior to passing on.

I began raising money for the Gentle Barn. I ran two charity golf tournaments and brought groups in that donated money to them. I was still volunteering 20 hours or more a week.

Finally in 2012 I rented my house out, left my job, and went to work and live at The Gentle Barn full time. After several years of experience raising and healing so many animals, especially calves, I became the Healing Center Manager. I work closely with the Vets, Ellie, and Jay healing the animals and socializing them.

I love my job and I love what we do for the animals and the kids at The Gentle Barn.

After all these years I am where I belong.

I am making a difference in this world and no longer a bump on a log.