At The Gentle Barn, when someone calls and asks for our help, or we find out about an animal who is suffering and has no one else, we try our best to lend a hand in some way. This week we got a call from a woman and heard the most horrific story:

A cattle rancher in Tennessee spent many years buying young cows at auction, bringing them home, fattening them up and then selling them for a profit, to be slaughtered. A few months ago this man bought a group of baby cows and among them was a small boy cow, later named Dudley who got bailing twine wrapped around his foot which constricted the blood flow and caused his foot to fall off. The calf could barely walk and for some reason the rancher took pity on him. When it came time to send the herd to slaughter, Dudley was spared and the farmer tried to make him well. 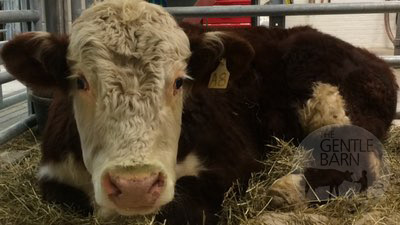 The rancher gave Dudley antibiotics to heal the raging infection, but later did not have the funds to give Dudley further care, like a prosthetic limb or surgery. Over the last 10 months Dudley had a very hard time standing or walking. Because he was limping so badly his spine was out of alignment, his muscles had atrophied and he was in pain.

In Tennessee there was a vegan woman who found out about Dudley and begged the man to let her get Dudley to someone who could help him. When she called us we immediately started calling veterinary hospitals and companies who manufactured prosthetics. With one of the leading bovine surgeons in Tennessee waiting to examine Dudley, and a prosthetics company on alert to create his missing foot, Jay and I boarded a plane bound for Nashville to save Dudley!

Dudley is only a year old. If allowed to, he would have still been nursing from his mom. When we rescue pregnant cows at The Gentle Barn, their babies typically nurse till about 2 years, because we never interfere with the mommy/ baby bond. But instead of being with a loving mom and a protective family, Dudley was ripped away from his mom at only a few months old, lost his foot, and was left to live in pain. The cows who he was with were rounded up and sent to slaughter after a few months, leaving Dudley lonely. Like the inner city and at risk children we host, Dudley had to grow up way too fast, and was robbed of his innocence and youth. Jay and I want to give it back to him! 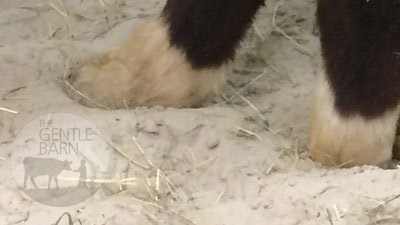 When we landed, we immediately drove Dudley 3 hours to the University Tennessee Knoxville Large Animal Hospital to be examined by an expert in bovine care and surgery. After an exam, X Rays of his foot, blood tests and fecal exams the surgeon told us that based on his condition and temperament and the nature of our organization, Dudley is an excellent candidate for a prosthetic limb. Dudley was then prepared for surgery where they will amputate the damaged bone and muscle from his injury and fit him with a temporary prosthetic. Then while Dudley is recovering, a mold will be made of his leg to be sent to a prosthetics company that will create a permanent prosthetic to be delivered in a month. Dudley will most likely be in the hospital for at least two months.

Once Dudley is completely healed we want to bring him to the safety of The Gentle Barn where he will finally find a safe home and a loving family for the rest of his life. When he is ready, Dudley will give hope and inspiration to thousands of war vets and other children and adults dealing with physical differences.

We cannot do this without your support! Dudley's surgery, post operative care, and prosthetic will cost thousands of dollars, but we believe he is worth it! Dudley has suffered enough, please help us save him, make him well, and enable him to pay it forward to people who need him.

Please go to www.gentlebarn.org to donate and select "Veterinary Care" as your one-time donation type. Even a small amount will help, and please share his story!

Thank you for loving Dudley with us!