Karma and Her Two Boys 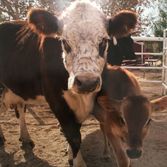 A few years ago, we were able to save a few cows from a horrible cruelty case. One of them, Karma, cried all through the first night. At first we thought she was just nervous about being at a strange new place, not knowing what we were going to do with her. Later, we thought that maybe she missed the other animals left behind. We thought that she would eventually settle down, after all she had clean water, fresh food, and shelter, however, she never did. Karma cried incessantly all night long. We didn’t get much sleep and finally at six in the morning I went down to see what was wrong. “Karma”, I said, “What’s wrong girl? You are safe here, why do you keep crying?” Then, I noticed it. There was milk dripping from her udders, she had a baby!

I called Jay right away and told him that Karma is crying for her baby, and he immediately called the backyard butcher where we got Karma and demanded to know where the baby was. The man explained to us that the baby had already been sold for someone to eat and the only reason he was answering the phone was because his truck had broken down before they could take the baby to the new place. With that, Jay hung up the phone, hitched up the trailer and drove to the butcher as fast as he could. When Jay got there he was relieved to find the truck and baby still there. Jay told the man that he (Jay) was going to fix the truck and the man was going to hand over the baby calf. The man just laughed and didn’t believe Jay could fix the truck, so they shook hands. The truck was on a hill and stuck on its gears. Jay merely towed the truck a few inches up the hill, the gears unlocked, and the truck was fixed. The man had no choice but to hand over Karma’s baby and Jay drove him home to The Gentle Barn.

When Karma heard her son’s small voice from inside the trailer, Karma started trying to smash in the fence or climb over it, bellowing to him all the while. When the tiny baby saw his mom, he was so relieved to see her that he collapsed at her feet. Karma patiently licked him and nudged him and made tiny encouraging sounds until he felt strong enough to get up and nurse. As he was suckling, Karma breathed a heavy sigh of relief and has not made a sound since. Karma and her son, Mr. Rojas, were to live out the rest of their lives together at The Gentle Barn, never separated again!

Eight months later my animal caretaker, Aldo, approached me as he was leaving for the night and said that he was worried about Karma because she had swollen udders. I asked him if she had an infection and he said no. He thinks she is going to have a baby. “A Baby”, I exclaimed, “but we rescued her with a tiny nursing son, surely they would not have impregnated her so soon?” Just keep an eye on her, Aldo asked. So that night when I went for my usual ritual of tucking the animals into bed for the night with carrots and kisses, I asked Karma if she was all right. Karma turned around and there was a foot sticking out of her! I ran up to the house and woke Jay and my kids up, who were already in bed and said, “wake up, we are having a baby!”

We all went down to the barnyard and found all our 20 cows in a perfect circle around Karma. My husband and I and our children joined the circle and we all watched as Karma contracted and pushed, and gave birth to her son, who we named “Surprise”. No one moved as Karma licked Surprise clean and dry, he struggled to stand, then grappled to walk, then figured out how to nurse, and drank his fill. Once he was full, Surprise lay down to take a much needed nap and sleep off his birth. At this point, every single cow broke the formation of the circle and made a perfectly orderly single file line in front of the sleeping baby. One by one, each cow sniffed, introduced themselves, and welcomed the baby, and then the next one in line, and the next, until every cow had a turn. When the cows were finished greeting the little guy, Jay, the kids, and I took our turns welcoming him into our family. Then we all sat around with smiles on our faces and together savored the miracle of new life and new hope.

Surprise is full grown now and still nursing. He is so much bigger than his mom and he has to practically lay down and roll over to reach. We had veterinarians in the past who have advised us to separate them and wean him, but no one told me when to stop nursing my kids and I was not about to tell Karma. Karma knows this is her last baby and after having babies taken away from her, her whole life, she wants to enjoy her son for as long as she can.

In the “real” world, these scenes of family and happy births don’t usually happen. In the dairy industry, calves are taken away from their moms as soon as they are born, as moms scream and cry. Cows are not allowed to fall in love and stay with their mates, nor are they allowed to raise their children with the aunties, uncles, cousins, brothers and sisters that we take for granted. At The Gentle Barn we have made a world where animals are respected, loved, and raised with dignity. When we rescue them already pregnant, they get to raise their babies and live in families, like they deserve. It is not enough that families exist at The Gentle Barn, animals should live protected in families with dignity and freedom everywhere!

I used to believe that there was good verses bad, sacred verses evil, greed verses generosity. However, the truth is that there is all of that in each of us and it really comes down to a choice: where do each of us plant our feet? Do we plant our feet in good or bad, evil or greed, peace or war, grudges or forgiveness, love or convenience? Each of us has that choice to make, and that choice defines who we are. We make that choice every day, with everything we eat, everything we buy, and everywhere we go.

The fastest, most efficient way we can create a kind world is to adopt a plant-based diet. When we adopt a plant-based diet, we save an acre of trees each year. Trees are animals’ homes but they also provide us with oxygen. When trees are chopped down to make more room for cows, so that people can eat more cows, get more sick, take more drugs, and, the drug and meat companies can make more money, that is a downward spiral that will not end well for any of us! On the other hand, when we adopt a plant based diet, we are saving trees which ultimately will save ourselves.

When we adopt a plant-based diet we can decrease our own risk of cancer, heart disease, diabetes, high blood pressure, high cholesterol, and dementia by 90 percent! We do not have to be this sick, we can be healthy!

So please plant your feet in love, peace and kindness, and help me create a kind world! If you are sick and tired of being sick and tired, if you want to help Mother Earth, if you love animals and want their lives to be more peaceful, please join me and adopt a plant based diet and make a real difference.

With gratitude and hope,