An Angel Gets Her Wings 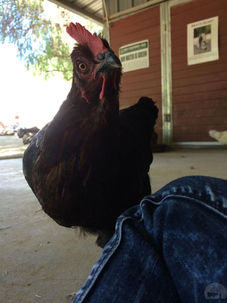 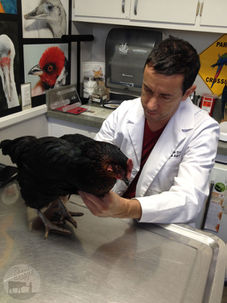 Sheba was a beautiful hen who loved life and was very friendly and curious. She got along with all the other animals and was always gentle. One day when we picked her up, she felt unusually thin and it alarmed us. She also had an empty crop, the part of a chicken’s stomach where food gets broken down, which should have been full from breakfast. We brought her to the vet right away to have her checked out.

Our avian specialist, Dr. Molnar, examined Sheba and found that she was egg bound. He explained that because farmed chickens are genetically engineered to produce double the amount of e.g.gs, earlier than normal, eventually their uteri rupture, get egg bound, or develop cancer. He said that farmed chickens are basically ticking time bombs and eventually need hysterectomies or major surgery.

Dr. Molnar tried to manually extract the egg to no avail and he called and said she had to have surgery to remove it. Once Sheba was under anesthesia and opened up, Dr. Molnar saw why the egg would no come out: Sheba’s uterus was filled with cancer and it was blocking the egg’s exit. It took many hours of very tricky negotiating but he removed the egg, the fluid, and, the tumors and sewed her back up. Dr. Molnar called later and said that he thought the surgery went well. However, Sheba was very weak because the surgery had been very long and involved, and he hoped she could get her strength back.

The next day Sheba started to recover and we felt hopeful that we could have our bright-eyed girl back home with us. Sadly, late that afternoon Sheba backslid and died in her sleep. When the vet called me to let me know, I felt such a mixture of emotions. I felt happy that we had given her the best chance she could have had, happy she died warm and peaceful, with no pain and knowing that we would do anything for her. I felt happy that she had lived a long life at The Gentle Barn and made it to old age without being eaten or abused. But, I also felt enormous grief that her body was set up to fail like this. She died because of the greed of the egg industry. People eat their fluffy omelets at their happy tables with their families and they don’t know how sweet, innocent angels like Sheba suffer in small cages, producing eggs while they are still babies, growing too fast, and being sent to slaughter when they cannot produce eggs. Even when they are in homes that love them, they still die of problems with their uteri because of the genetic engineering. Good grief, isn’t there anything else we can eat for breakfast?!

I hope that Sheba’s story helps to create awareness and maybe her death isn’t so senseless. Maybe some of you can chose to eat more gently in her memory?

We love you Sheba and will always remember you!