Please Help Us Save Hero's Eyes! 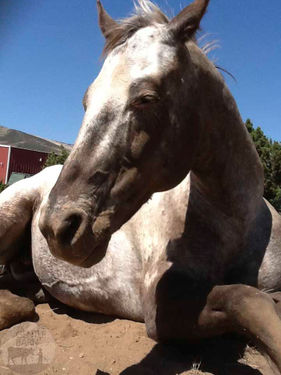 When we saved Hiroka (Hero for short) from the backyard butcher two-and-a-half years ago, she was emaciated, malnourished, filthy, hopeless, and had a wound on her leg that was infected down to the bone. It took many months, thousands of dollars, lots of vet care, and tons of Sun Chlorella Super Food to heal her. Finally, her coat began to shine, her eyes began to twinkle with renewed hope, and her spirit began to dance with joy. She has been happy with us ever since.

Horses, especially Appaloosa horses with light pigmentation around their eyes are more susceptible to carcinomas and complications. This is why fly masks are so important. Before we saved Hero, she had probably been parked outdoors without protection for many years. In November, Hero developed major problems with her eyes. She had deep holes and no sensation in her corneas and her eyesight was failing. We ran tests and consulted with several experts to save her eyes.

Hero was in and out of the hospital for three weeks. Hero was finally sent home, but even though we have been giving her a rigorous regimen of medication and treatments every few hours throughout the day, her eyes were not improving. Our equine vet came out to examined her and we were told that the only chance of saving her eyes was to bring her to an equine hospital that had an on staff ophthalmologist. The only hospital of that kind in California was UC Davis.

Hero has already gone through so much in her life; she deserved a chance! We didn’t have a lot of time, her eyes were about to rupture, so Jay hitched up the trailer immediately and drove all through the night to get her to UC Davis by morning. After an exhausting 7-hour drive for both Hero and Jay they arrived safely at UC Davis. A crew of neurologists, ophthalmologists, and equine specialists were waiting for them when they arrived and admitted her right away.

After their initial exam they said that they were really worried about her left eye and are going to try everything to save it. They are more hopeful about her right eye’s prognosis. After a few days at UC Davis Hero's left eye ruptured and there was little to no chance of sight recovery. Tragically they had to surgically remove her left eye.The procedure was quick, Hero recovered nicely and she felt much better with no pain on her left side.

The eye specialists felt good about her right eye's prognosis and spent ll efforts to save her sight! Hero’s care has already cost us thousands of dollars. Please help us save Hero’s eyes; we can’t do this without you! Any donation amount would be greatly appreciated. And please share this and say a prayer for hero!To donate, go to: http://www.gentlebarn.org/donate/donate.html

MyCHELLE Dermaceuticals and Crystal Deodorant are proud to sponsor The Gentle Barn. We admire the work they do to rescue and lovingly care for animals who have been subjected to animal testing. United by a cruelty-free mission, we want to help spread awareness for the work they do. It is impossible to look into the eyes of the animals they have rescued and not ask yourself… what more could I do. Join us in support of this wonderful, “second-chances” organization and look for cruelty-free on the products you buy.