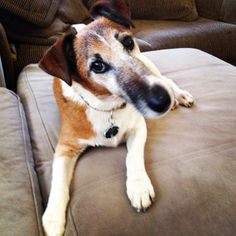 We awoke one morning several months ago to find a small crate at our gate. When we looked closer, we saw that inside it was a small, shivering, very upset dog. We brought him up to the house and slowly and carefully opened the crate and out came a pure bred, smooth-coated, fox terrier. The first thing we noticed was that he seemed very distressed and was shaking violently. The second thing we noticed was that he was wearing a shock collar which we took off right away so he wouldn’t make a noise and get shocked by mistake. Then, we noticed his hind end - one of his hind knees seemed swollen and there was something wrong with his other hind leg which he was holding up in the air and limping on three legs. Besides appearing to be in pain, he seemed really devastated to have been left there and was staring at the door as if he was waiting for his person to change his mind and come get him.

He was left with a note that explained that his name was Fox, he had had an accident and hurt himself, and, they could not afford to care for him and knew we would do right by him. They left the veterinarian’s name and number. When we called the vet, he explained that Fox had hurt himself and had a dislocated hip and a torn ligament in the other knee. Fox had a prior surgery to correct the hip but it was unsuccessful.

We immediately took Fox to our veterinarian to be examined. He said that he would need two surgeries, one to put his hip back in its socket, and when that healed, he would need another to fix his torn knee. He said we were looking at months of surgeries, physical therapy, and recovery time, and we would be paying thousands of dollars.

At The Gentle Barn we never make decisions based on funds or ease, we make decisions based on what is right and fair for the animal. Fox was full of life, only nine-years old, and we believed he deserved a chance. So, we scheduled the first surgery date for the following week, giving him a few days to settle into his new foster home, relax and boost his immune system. Meanwhile we hoped and prayed that our efforts would be supported and we could come up with everything we needed to heal him successfully.

Our hopes and prayers were answered! As people heard about Fox, funds started pouring in. It seems it wasn’t just us taken by his little grinning face. On the day of his surgery, we were all feeling excited and nervous but we kept promising Fox that when this was all over he would have the most wonderful life. The surgery was long and very involved, but successful and we took Fox home groggy, on pain meds, and with strict instructions to keep him still and quiet for a few weeks.

It was hard to keep him still. He was so playful and just wanted to chase tennis balls. We had to be very disciplined and not give in to his requests to be free and run. It felt like forever but we finally got through the first two weeks and Fox could start moving around a little bit. We then took him to Healing Touch in Sherman Oaks, California for rehabilitation and to see whether treatment to his knee with acupuncture could avoid a second surgery.

We gave Fox weekly acupuncture, water therapy, massage therapy, and ultrasound on both his recovering hip and his torn knee for several months. Slowly, he started using both hind legs and feeling stronger, until many months later he was putting weight on both hind legs, feeling great, going for long walks, playing tug of war, and chase with other dogs. We got a clean bill of health from the vet. Yes, we did it! Fox was now a healthy, happy pup and now all he needed was a forever home.

When we first rescued him, a family had e-mailed us and asked if they could adopt him when he was ready. We let them know that it would be months and we would have to play it by ear, and would let them know when he was ready. It was now time to reach out to them and they were interested in meeting Fox. As soon as they met him, they fell in love with Fox right away and took him home. Fox settled in like he had been living at their house his whole life. He now plays ball with the daughter, goes for walks every day with his new doggie sister, and sleeps on the bed each night cuddled up with his new mommy and daddy.

Fox was healed and onto the rest of his joyful life but we were still holding onto judgment and resentment towards his former person. How could anyone just leave a dog like that in the middle of the night? Why didn’t they just call us and ask us for help? It wasn’t long before we got some answers. His former person called us and much to our surprise, Fox helped us learn a most valuable lesson.

The woman explained that she was gay and had been disowned by her entire family. Fox was her only friend, the only one who accepted her for who she was. When Fox injured himself, she didn’t have the money, but she somehow came up with enough to do the surgery. When the vet said it was unsuccessful she felt so defeated. She had no way to come up with another $10,000 for a second surgery and didn’t know what to do. So she called around to twenty different rescue groups begging someone to help her give her angel the necessary operation. However, every single rescue group that she called said that he would be better off being put down. The woman could not bear to end his life! He was the only one who loved her unconditionally and she had to do something for him now! Then she heard about The Gentle Barn, but knowing that twenty rescue groups had already turned her down, she feared that surely we would do the same. The only thing she could come up with to save her best friends life was to leave him with us in the early morning and hope we would do right by him. We know that we would have helped her if she had called, but she didn’t know that. In her mind, leaving him at our gate was the only way to save his life.

It is so easy to judge another, not knowing exactly what it would be like to be in their shoes. We judged Fox’s person, and as much as we helped Fox, Fox ended up giving us way more than we gave him. He taught us how to love unconditionally and how to never ever judge, because we never know what is really going on. Thank you, Fox, your lesson and your legacy will live here at The Gentle Barn until the end of time!