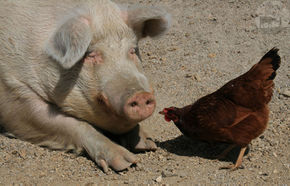 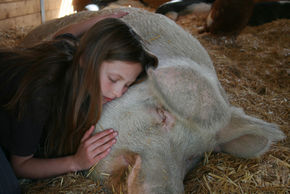 Eight years ago, Jay and I took our kids to a pumpkin patch. We had no idea they had animals there, but when we got inside we noticed a small baby pig in a cage. He looked alone and not very happy so we spent most of the day giving him treats and petting his tummy through the bars. When the day was over, we saw the owner of the pumpkin patch as we left and told him that we fell in love with his piglet. The man said that the pig was not his, only on loan, and the day after Halloween the pig would be picked up to go to slaughter. My family and I were very upset at this news and went home and could not stop crying.

Almost a week later, I was getting the kids ready for school in the morning and Jay came in and asked us to come out to the barnyard. I told him that I would come out later since I had to get the kids dressed and fed. Jay insisted that we come right away. So… we all went to the barnyard in our pajamas. To our delight and surprise, running around the barnyard in great joy was the pig from the pumpkin patch! Jay had saved him for us!

We watched as Biscuit ran around the barnyard, so happy to be out of a cage. He jumped in the mud bath and spun around, then met all the other animals, rolled in the hay, then back to the mud. He was ecstatic and so were we! Biscuit immediately became a fan favorite of the barnyard with his “full of life” antics, and his sweet, kind, disposition.

Biscuit is now 1,000 pounds of pure love and affection! Because pigs are genetically engineered to get very big, very fast so they can be slaughtered at six-months while still babies, by the time they are full grown at three-years old, they are abnormally huge and eventually cannot walk. Biscuit is eight-years-old now, the oldest pig we have ever had. Biscuit is very disciplined, and wants to stay healthy, so he jogs around the barnyard every single morning. With his exercise routine and plant- based diet, he hopefully will live many more years, giving us many more opportunities to snuggle and cuddle with him!

Come celebrate Biscuit’s anniversary, give him a tummy rub, and see what a great guy he is! See ya in the barnyard!