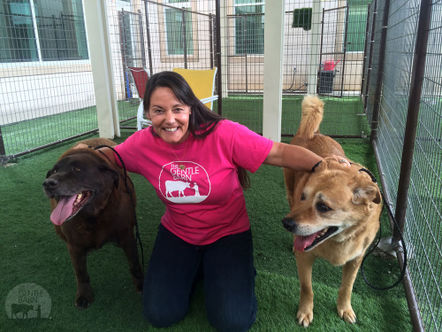 Last week, I received three different emails from three different people asking if we could help save two beautiful senior labs left at the pound because their person was moving and didn’t want to take them with him. My fingers scrolled down to see the attached pictures as my brain screamed, “don’t look, don’t you dare look!” But of course, I did look and I was hooked the minute I saw their faces. Sid’s smile was contagious, and Sam’s innocence leapt off the page. I could not let them die, but I had no foster homes, what could I do? Knowing they were scheduled for euthanasia that night, I had to do something. So, I called the person in charge at the pound and asked her about them. She said they came in together and were extremely sweet. They were estimated by the pound to be 15-years old and were in relatively good shape. They had good appetites and got on well with other animals. The manager told me that no one had shown any interest in them and she had little faith that anyone would adopt them. By the end of the conversation I found myself saying, ‘Can you give me until Monday to find a foster home and I’ll come get them on Monday?”

I posted them as fast as I could on Face Book asking for a foster home and then what I had done started sinking in: what if I could not find a foster home by Monday? Where would I put them? What would I do? I started to panic. Then, a small voice in my head said, “I have always had everything I always needed and this is no different. They will come”. Sure enough, over the next three days emails poured in from families all over Los Angeles offering up their homes and their hearts for Sid and Sam. I felt elated, hopeful, and so very encouraged.

Bouncing these two angels around from temporary foster home to foster home, however, was not going to be a good life for them. What I really wanted was a permanent foster home where they could live out the rest of their golden years with dignity and love. Was that too much to ask for? Could I really find that? Sure enough, not one, but two permanent foster homes came through! Two lovely women fell in love with their faces and wanted to help and were willing to give these sweethearts a forever home, while Gentle Barn helped with the costs of their care. We chose the home closest to our vet, The Healing Touch, knowing they would most likely be going there several times a month for acupuncture and massage therapy.

On Monday, I drove the two hours to the animal shelter to pick Sid and Sam up and take them to their new home. I could not wait to meet them. After filling out the paperwork and paying their fees, I headed down the long hallway towards Sid and Sam’s kennel, and there they were smiling at me as if they had been waiting for me all morning. We put their leashes on and they literally pulled me to the car. I noticed as we lifted them into the car that they do have some stiffness and soreness from arthritis and were extremely overweight from a lifetime of living in a back yard with low end food and no exercise. Their nails were overgrown, their coats slightly matted, and their teeth seemed neglected. With some attention, daily walks, grooming, a strict diet, teeth cleaning, and acupuncture, they would be different dogs in a few months! They will get to live in a house for the first time in their lives, be a real part of a family, and know that they are loved and adored. This was the start of a whole new life for them and I felt so honored to play a part of it!

It took us three hours through traffic to make it to the foster home. The family was waiting to meet them and so were the resident dogs. After making their acquaintances, sniffing the yard and every inch of the house, Sam and Sid lay down in the middle of the living room, closed their eyes and fell asleep with smiles on their faces. After living outside for 15 years, being taken to the pound where there was non-stop barking and chaos, this was probably the first time in a long time they had a real sleep, and they were probably exhausted.

I left Sid and Sam sleeping there and while I drove home and for the rest of the night all I could see when I closed my eyes were their smiles and the unmistakable relief on their faces. It is what I live for and what I work so hard for. It is what makes me feel alive, like I am worth something, that I have earned my keep here. It is what keeps me going and what motivates me to stay healthy, because I want to spend many more years doing this work. Every time I start a rescue project off scared and unsure and then it gets to the end when it works out perfectly, I feel so sure that there is more than just us working here. That there must be a divine intelligence that makes everything work out, always! Thank you divine intelligence for making everything fall into place. Thank you everyone who shared their plight on Face Book or said a prayer for them. Thank you to all the generous hearted people who stepped forward to take them in, to help us save their lives. And, thank you Sid and Sam, for giving me the opportunity to learn about faith, again!