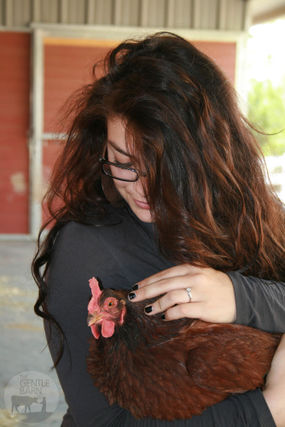 I hosted a group of teenage foster kids at the barn this week. They were pretty shut down and uninterested at first, as most teens are that come to the Gentle Barn. I asked them to have a seat at the picnic tables in the shade and everyone walked over and took a seat except one girl. She stayed where she was and told me in her very silent protest that I was not the boss of her. I asked her to please come over and sit with us and she very slowly walked over to where we were but refused to sit down. “Here we go”, I said to myself.

I told all the kids that the animals that reside at The Gentle Barn are heroes because they all come from severe abuse and neglect, have all been to hell and back, and have overcome their pasts and learned to overcome. At The Gentle Barn, they all got a chance to express their trauma and pain and learn to forgive, trust again, and embrace love. I told the stories of Bonsai, the horse, and, Dolly, the cow, who were so scared and shut down when they first got here. I told them of Bonsai and Dolly’s healing process and how eventually they learned to love and be loved. I told the kids that we are all the same, we just look different and that animals feel happy, sad, scared, and want to have good lives, just like we do. We talked about the animals’ body language and how they show us what they are feeling by running away, or standing still and allowing us to pet them, or moving their ears back when they don’t want to share carrots with the other horses. I knew that just like the animals, the girl standing up had been through horrendous abuse and she was showing me how tough she was with her body language.

The kids softened a bit, relating to the animals’ stories, knowing deep down inside that I was really talking about them. Although this teen really wanted to show me that she didn’t care for me or my place, when we got to the cows she connected with them, hugging and brushing them all. I could see the child in her starting to peek through. I learned that her name was Lex.

When we got to the upper barnyard, I asked for everyone’s attention so I could let them know a few things before we went inside. Everyone stopped talking and waited for my instruction, except Lex, who kept right on talking. So I waited, and the kids around her said shush. She stopped talking for a moment but the second I started speaking she went back to her side conversation. I asked her five times if I could please have her attention and she would not stop talking. So, I asked her softly to please come stand by me, which she did. But the whole time she kept saying that she didn’t know why I asked her to stand by me, she didn’t know what she did, she didn’t understand what the problem was, and on and on. When I opened the gate to the upper barnyard to let everyone in, Lex passed me and glared at me as hard as she could.

I knew I could not discipline her or even talk to her as I wanted to, because it was not my place and it would make the other kids and the counselors feel uncomfortable. But, I had to say something so that she would know I saw her and held her to a higher standard of behavior. So, I just kept repeating, “I know you know.” I looked right in her eyes as she was glaring at me and kept saying to her, “I know you know.”

When we were done giving pigs tummy rubs and cuddling turkeys, we went down to the picnic tables to say our goodbyes. I felt so disappointed and sad. This beautiful young lady was so defensive and tough but I knew all too well that she was like that because she had been so badly abused. It was as if she was going through life with her fists in the air believing that everyone was out to get her and she was the victim of life. She was indeed the victim when she was a child to whatever torment she had been through, but she was not the victim now. Lex needed to learn to own her part and take responsibility for her actions or her life would be so very, very hard. I wanted to teach her that lesson so badly but knew I could not, not today. I hoped and prayed that perhaps the animals and their stories had made an impact on her.

I said goodbye to the group, thanking them for coming and being gentle to the animals. Some hugged me goodbye, others gave me high fives, but they all had smiles on their faces and seemed lighter and younger then when we had started. Then, all of a sudden Lex was standing in front of me and she said, “Thank you for letting me be here today and I am so sorry I was talking while you were talking.” I immediately threw my arms around her and gave her a huge hug and told her how proud of her I was. I told her that I was so worried that she would go away mad and I was so very happy that she came to talk to me. I told her that she was a rock star and that it was such an honor to have her here. Lex was beaming from ear to ear: she had done it! She had dropped her pathology, dropped her ego, she had owned her part, and she had been vulnerable. If she can hone in on that skill and do that always, then life would be easier for her. I was so proud of her I could have cried!

Lex had come in arrogant and impenetrable, but through the animals and their love, she had softened. Being vulnerable, being soft and humble only brings love and honor, and that is the only place where real healing can start. Lex found that soft spot today and she was going to be OK after all. Along with the animals, Lex was a hero that day and I felt so honored to have played a very small part in her transformation. From now on when I feel indignant and blind to my part, I will forever think of Lex and how she chose to be open and vulnerable and brave at The Gentle Barn.