Happily Ever After in Ohio 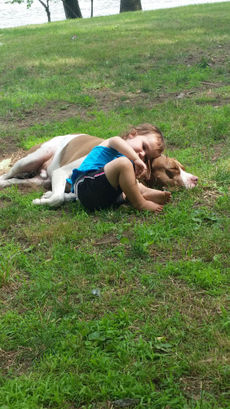 About four years ago, there was a pound in Ohio that was keeping the dogs outside in the snow during the winter. The dogs were getting very sick and after a public outcry the authorities in charge decided to euthanize all the dogs and shut down the pound for the winter. Gentle Barn’s Jay Weiner caught a red-eye from California to Ohio and arrived just in time to stop them and take all the dogs out of the pound to a nearby vet hospital. Over the next three months, Jay made sure no new dogs entered the pound and instead took them to the vet. With the support of our fans, we spayed or neutered all the dogs, healed them from frostbite, Parvo, kennel cough, and heart worm, and found loving, forever homes for them all over the country.

Simultaneously, we renovated the entire pound putting in hot water, sinks, heating, indoor runs, and trained the staff to know how to screen people so the adoptions were permanent. Jay even removed the gas chamber! Since we were involved, the pound has been a no-kill shelter and we saved over 60 dogs while we were there.

This week a family who adopted one of the dogs e-mailed us. I got a sick feeling in my stomach fearing that they did not want him anymore. But, instead they were e-mailing us to let us know how much they love him and how grateful they are to have him as part of their family. I was so happy I cried!

These are the moments we work so hard for. Thanks to all of you who supported us while Jay was in Ohio, who helped us do home checks, transport dogs, donated towards vet care, and supported us with your prayers and good thoughts. This is the love and joy and happy ending that you helped us do!