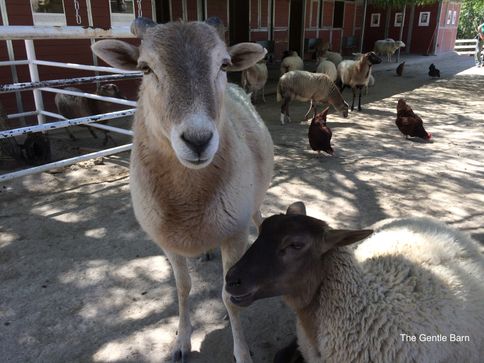 Almost five years ago, we discovered a backyard butcher who was doing horrible things to animals. We started pulling animals from there (that were literally on the verge of death) and bringing them home to The Gentle Barn to save them. Meanwhile, the authorities were working on making conditions better there. Over the course of four years, we have saved over 60 animals from there. Eventually authorities arrested him, confiscated the rest of his animals, and brought them to us to heal.

There was a sheep we named Thumper who was very ill. He was only a few weeks old and had pneumonia and high fevers for a long time. When he was about two months old, we asked the vet if we should neuter him. He said he was way too sick to be neutered and we should wait. We asked if we should separate him from the others just to make sure we didn’t have any babies. He assured us that he was way too weak and frail and that we should not worry.

Thumper recovered and was neutered about a month later, however, he fathered six babies ( he had two sets of twins)!

In the “real” world male animals do not get to be fathers. They are taken away from their mates and their children way before they are born. Most moms do not get to raise their children either. Animals are torn apart while they scream for each other and suffer unprotected, unseen, and unrecognized.

Even though his fatherhood was not intended, it has been an honor to witness the love Thumper has for his babies and his wives. Many people think that animals do not care about their babies, especially if they are males, but Thumper really loves them and spends time with each of them every day, grooming, playing, and protecting them. At The Gentle Barn we work hard every single day to create a world where animals can love their families, where mates can stay together, and males and females can experience what we might take for granted: the right to nurse, raise and care for their children.

The moral of the story: we should NOT have named him Thumper!

MyCHELLE Dermaceuticals and Crystal Deodorant are proud to sponsor The Gentle Barn. We admire the work they do to rescue and lovingly care for animals who have been subjected to animal testing. United by a cruelty-free mission, we want to help spread awareness for the work they do. It is impossible to look into the eyes of the animals they have rescued and not ask yourself… what more could I do. Join us in support of this wonderful, “second-chances” organization and look for cruelty-free on the products you buy.