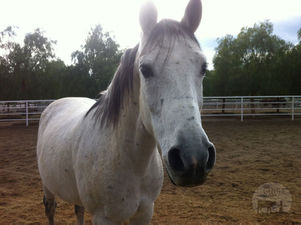 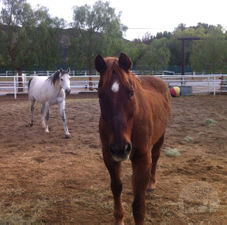 Andrew was used as a stud horse for 25 years. When he was no longer able to “perform” he was left in a ravine to die. The animal shelter found Andrew a hundred pounds underweight, malnourished, scared, and very depressed. Because he was in such bad shape, the shelter scheduled him for euthanasia. Just before they were about to put him down, a shelter volunteer called us and asked if we would save him. We went to get him and when we met him his head was down, almost touching the ground and he seemed so hopeless. We explained to Andrew that we had a place called The Gentle Barn that is home to older animals. He didn’t have to carry us, or make money for us, and we would love him, care for him, groom him, give him lots of treats, and most of all, love. That he would be part of our family and he could stay with us for the rest of his life.

As we were explaining this to him, he raised his head higher and higher and by the end of our conversation, he was looking us straight in the eye and seemed to be perking up. We asked him if he wanted to come home with us and he looked at us as if he was saying, “lets go!” He then turned around and motioned with his head to another horse that was standing near him. We had not really noticed this other horse until then and when we looked we realized that this was another older horse who seemed to be in bad shape. We asked the shelter volunteer about this other horse and she said that he was being euthanized the next day. So, of course, we took them both home to The Gentle Barn.

Andrew and Patrick are now best friends and we are sure that Patrick knows that it is Andrew that saved his life. The two of them are inseparable, and Andrew is even jealous of the other horses when they get too close to Patrick and chases them away. The two buddies will get to retire at The Gentle Barn for the rest of their lives and inspire the children we host to have hope, even when the situation seems hopeless and find love and friendship wherever they are.