I Am Perfect the Way I Am! 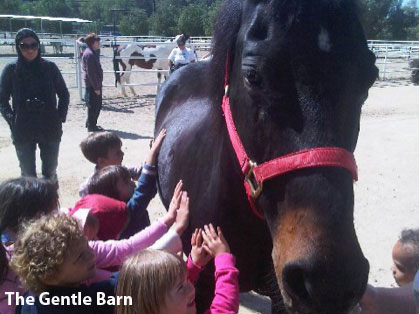 This month I hosted a group of 10 and 11 year old kids from a foster care agency who came to The Gentle Barn for a visit. We paired each of them up with their own horse to groom and spend time with. While the kids were busy bonding and brushing, I told each of them their horse’s story. The stories were different because each horse came from a different circumstance, but what they all had in common was that each horse was accustomed to feeling disrespected, unseen, unheard and unloved, just like these kids.

We started by explaining that it is very important that we talk to the horses before we brush them. Just like I wouldn’t brush the kids’ hair without asking, it is disrespectful to do something with an animal’s body before asking them, or, at the very least, letting them know. We also let them know that when we are grooming the horses they will like certain things, and, dislike others. It is important that we listen to them. I asked the kids if they knew what it was like to be ignored or unheard and they all raised their hands. So I let them know that the animals know what that’s like as well and that is why at The Gentle Barn we always listen so we don’t miss anything they say to us. If a horse moves backwards while we are brushing their back, then they are asking if we could scratch more on their withers or neck. If they lick their lips they are asking for us to groom them softer. If they put their ears back, they might not like what we are doing. Some horses are ticklish and don’t like their bellies groomed, some love their bellies brushed, and we can find out by watching their faces and letting the horses tell us.

When we were done sprucing up the horses, each child helped feed their horse dinner and lots of carrots. Then we went to the top of the property to make wishes in our wishing well.I asked the kids if they had anything in common with their horse and they each said, “Yes.” One boy said that his horse, Rascalina, was kept by herself and was lonely and sad. He said that he knows what it feels like to be lonely. Another boy said that he was the same as our horse, Sasha, because he was also hit and yelled at when he made mistakes. I asked the kids what they would tell their horses if they could.One boy raised his hand and said, “I would tell Sasha that she is perfect the way she is.” And I said, “So that is true for you as well, right?” and he agreed. I asked the kids to find a small rock that might be lying near the well with a flat side that they could write on. Once they all had one, I asked the kids to write, “I am perfect” on their rocks and when they were finished to toss them into the wishing well. I told them that the truth about them will be here, in our wishing well ‘til the end of time and wherever they go and whatever they do, they should remember the truth, that they are perfect just the way they are!

Then the kids closed their eyes and made wishes at the well and when they were done we hugged good-bye.As they skipped off to the van, I noticed that they all left just a bit lighter and brighter than when they had come in and I felt immensely grateful to be able to watch miracles happen every day!