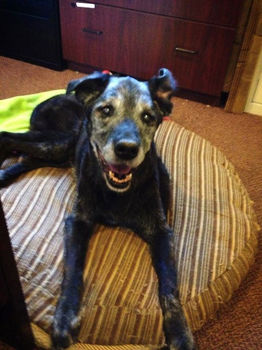 As you probably know, Charlie and Lacey were rescued eight months ago from being put down at an animal shelter. They were arthritic, incontinent and old. Over the last several months, we have been giving them acupuncture, massage therapy, chiropractic, and water therapy and it has really helped them with their mobility and walking. Lacey had a huge fatty tumor on her rib cage, just behind her elbow. It made it very difficult to walk and twisted her spine out of alignment causing her pain, but she was so weak when we first rescued her that the doctors advised against surgery. Over the last few months, Lacey has gotten stronger so we took her to see one of our vets who has a very safe method for anesthesia, good for older animals, and he said that it was time to get the tumor removed. Lacey went in for surgery and we were so nervous. A few hours later he told us that it was the biggest tumor he had ever seen, but the removal was successful and Lacey was recovering nicely. Since Lacey has come home from surgery, she has not stopped running. She is so excited to have all that extra weight off of her and nothing getting in the way of her mobility. She has an extra big smile on her face and, thinking back, removing that tumor was one of the best decisions we could have made for Lacey. Lacey and Charlie's smiles warm our days and melt our hearts.