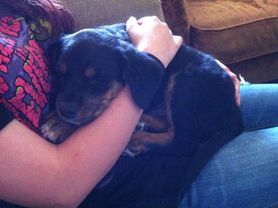 When we first saw Benjamin lying on the side of the road at our fence in the hot sun, he was extremely lethargic, severely dehydrated, and would not stand or look at us. At first, we thought he had neurological problems caused by distemper, but at the same time he smelled of Parvo. The vet said that perhaps the reason he was not walking was because he was so weak and depleted by the Parvo. He did come up positive for Parvo so we started addressing those symptoms. In a few days he stopped throwing up, he was no longer dehydrated and he started eating, but he still did not stand up and could not track anything properly with his eyes. This still looked like neurological problems to us and we were very worried about him. Late Friday night he went into a full-blown distemper seizure which made him foam at the mouth, chomp his jaw and howl and scream constantly. We had cured his Parvo, but the distemper, which had caused irreversible damage, even before we found him, was killing him! The screaming lasted for 4 hours until we knew without any doubt that it was our duty to set him free from a body that was clearly no longer working.

Most of the time animals come to The Gentle Barn to heal and to live, but our most important work is when animals come to The Gentle Barn to die. Benjamin’s own family would not care for him or see him to the end, for whatever reason. But instead of dying on Sierra highway, in the dirt, alone, we found him! Benjamin died after knowing how it felt to sleep in our bed, to sit on our lap, to never be alone, to have people from around the world praying for him and sending him love, and to leave while laying not in the dirt, but in our arms, hearing soft words, and knowing love! That is why he was here and we are honored to have played that role in his life.