Posted on Sep 30, 2013  | Tags: Chris the Horse, Worthy the Horse, Indie the Horse, horses
By Ellie Laks, Founder of The Gentle Barn 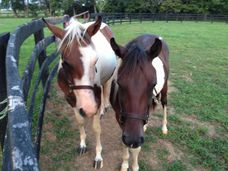 Chris was taken away from an abusive situation in South Carolina along with Worthy and Indie. The #GentleBarn got Worthy and Indie checked out by a vet who said that Worthy’s deformities were severe and she should be put down. Instead, we found a surgeon in Kentucky who agreed to do the extensive procedure that Worthy needed to give her a chance, after warning us about the risks involved. Worthy went to Kentucky for her surgery, her mom Indie went along for moral support, but Chris, her brother, stayed in South Carolina.

A few weeks ago we were told that Chris had gotten out of his fencing and was running wild in South Carolina. The people in South Carolina could not catch him and that if Chris could not be caught soon, he risked being shot because he was posing a threat to public safety. So Jay left The Gentle Barn and got on a red eye, flew all night and arrived in South Carolina to pouring rain. He spent 8 days in the woods and rain trying to catch Chris to no avail. He tried to catch him, sedate him and even darted him three times with a tranquilizer, but he would not go to sleep. He tried to find the horse with four wheel drive vehicles and searched for him for miles and miles in ten square miles of woods, for hours and hours, but could not catch him. Chris was scared of humans but mostly he seemed to like being wild and free. He seemed to like running wild in the woods, eating fresh sweet grass in the open pastures and sleeping under the stars. I wish we lived in a world where Chris could run free and be a safe citizen of this country. But unfortunately we don’t live in that world anymore, most animals in our society don’t get freedom, so we continued the pursuit, wanting to get Chris before the someone else did, who wouldn't look out for his best interest, especially since hunting season had just started.

After many days in the pouring rain, being eaten by mosquitoes, and being out in the blistering heat, Jay and the people helping had an idea. They would set up fencing and try to lure Chris into the pen with a female horse. Chris had been on his own in the woods for about three weeks by this time, and he was a stallion, not yet fixed, so maybe he would see the mare and choose company over freedom. Sure enough, the minute Chris saw the mare he started whinnying very loud and galloped over to her, once inside the pen they closed the door and got him. Chris was safe at last!

By this time Worthy and Indie were out of the hospital and in a boarding facility while Worthy’s muscles got used to having a straight leg. So it was time for Chris to be reunited with his family. Jay drove Chris all night from South Carolina to Kentucky, it took them 10 hours to get there and they arrived very early in the morning.

Chris went straight to the hospital to get fixed (called gelded for horses), have his teeth done (called floating for horses), and his hooves trimmed. The vets said that judging by his teeth Chris is about 3 years old and still has baby teeth. When he could be transferred, Chris was brought to the boarding facility where Worthy and Indie are staying. They haven’t seen each other yet though. Testosterone can stay in his body for 30 days and if he sees them he might get so excited he might hurt himself or Worthy, so soon after being gelded. So the owner of the stables is socializing him and getting to know him and when she thinks he is ready, she will bring him to see Worthy and Indie.

We get the chills thinking about the reunion and we can’t wait until Chris, Worthy and Indie can run and play together in the green pasture there and be a family again! Once Worthy is cleared to go home and travel, all three of them will join The Gentle Barn, either in California or to a new Gentle Barn on the East Coast. We will keep you posted!