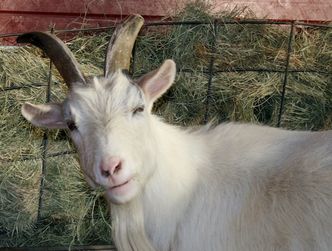 13 years ago we discovered an abusive petting zoo and started taking home animals that were sick, lame, or terrified in order to heal them. One of the very first goats we took in was “Billy” the goat. He was a tiny baby, only a few months old and he had horrible pneumonia, green stuff coming out of his nose and a high fever. He was not getting any medical care at the petting zoo, so we asked if we could take him to save him and they agreed. We asked about his mom and they said that his mom didn’t care about him and that we should just take him. That did not sound quite right to us, but we scooped him up and carried him out. As soon as we did that, the mommy goat started screaming, ramming the fence, and going absolutely crazy, doing everything anyone would do if his or her beloved child was abducted. I went back into the petting zoo and insisted on taking the mom, because she clearly cared about her son! Duh!

Once Billy was home at The Gentle Barn we gave him great quality food, clean water, medical attention, nutritional supplements and lots of love and he healed nicely. Billy grew into a handsome, strong, intelligent and very affectionate (but only when he felt like it), guy. Billy’s mom, Sophie was a doting, nurturing, loving mom who taught us a tremendous amount about the bonds between animals and their babies. As demonstrated by Sophie, animals adore their children the same way we do, have the same drives to protect them, and the same wish to raise them and be in their lives as we do! Sophie allowed Billy to nurse for about 2 years. She would hold still and be patient with him until he had his fill. When Billy was about 2 years old Sophie, in her infinite wisdom decided she had enough and Billy was done. One day he came to nurse, like he always did, only this time she gave him a swift kick and said, “no more!” and that was the day Billy grew up and became a mature, respectful, adult member of the herd. When there was cause for concern, however, like barking dogs, a new animal friend, an overly excited running animal, Sophie would stand in front of Billy and protect him, no matter how old he was! Sophie and Billy were often found in the barnyard together, grooming each other, or just leaning against each other for company. Their bond never wavered, or diminished, they have always been close; there was never any mistaking the fact that they were mother and son. In fact, if Billy had been able to breed and start a family of his own, we are sure that Sophie would have made an amazingly, loving and doting grandma too!

Over the last few months Billy has had an infection that caused a runny nose. Even though he has been on medication and the strict supervision of the vets, he had made no progress at healing. We changed meds, added supplements, all to no avail. Because his nose was stuffed up, Billy could not smell and therefore had no appetite and was loosing weight. The vets said that goats usually live till about 8, Because Billy was 13 and so old, his body just could not get a head of the infections.

This week Billy had either a stroke or a seizure and was left with very little brain function. He was not eating, his body was unable to digest food so he was constantly throwing up, and he was not responding to anyone. The vets came out right away and believed that Billy had a brain tumor and it was causing the seizures and his decreased brain function. They said that he would slowly waist away and would continue to have seizures and that it is their recommendation that we help him out of a body that is no longer working. Making these kinds of decisions is the hardest part of our job! But if our job is to love the animals, care for and protect the animals, then it is also to give them a dignified, peaceful pain free exit when the time comes so they don’t suffer.

The vets gave me a moment with Billy and I said to him, “I love you unconditionally, I love you whether you stay or go. If you want to stay though, you had better go over and eat something right now so I’ll know you are not done.” Billy looked at me as I said these words and deliberately walked away from me, away from the food. I brought Billy into a stall in the barn and waited for the vets to return and I though I would try to talk to him again. So I told him that it is my job to help him out of his body when he is suffering and today is that day. As soon as I had said that, Billy walked right up to my face and stared into my eyes and I felt like he really wanted to go, that he was ready! Then he licked my face and kissed my nose and thanked me for understanding him. 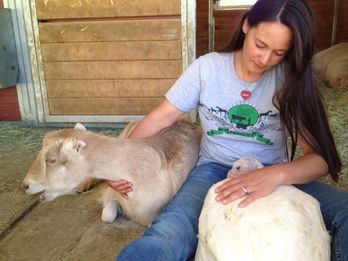 This Tuesday afternoon, with the birds singing a farewell song and the breeze whispering its support, Billy left The Gentle Barn and all who loved him. He did not resist or struggle, in fact he lay peacefully in my arms and departed very quickly and easily. Moments after he left, his mom Sophie came over and lay on my left, Sassy the goat lay on my right, and Ellen the turkey came running over and lay in front of me, and we grieved together. We shed tears because we will miss him so, but we also smiled as we remembered how amazing he was and how grateful we were to have met him and shared in his life!

Billy was always very particular about when, how and if he wanted to be pet. He also was not very fond of children because when he was born at that abusive petting zoo he was chased and tortured by kids. We spent years healing him for that trauma and he came a long way in forgiving kids. But over the last few months Billy really turned a corner and decided to let the past go and reach out to children. When we had groups over the last few months Billy would walk into the middle of them and insist that they all pet and hug him. I am so proud of him and honored to have known him and will always remember him surrounded by children while he smiled in love and triumph!