The vet came out this week to check on Joy. She is an older goat, rescued from severe abuse, and has a lump on her neck, which is getting bigger. She also spends lots of time lying down, which is normal for an older goat, but we just want to draw some blood and make sure she is A-OK. 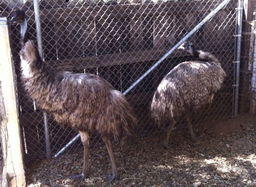 A man bought a house and when he moved much to his surprise there were two emus in his new backyard. So, being a caring person, he made them a part of his family. Several years later he was forced to sell his house and didn’t want to abandon the emus, so for the last six months he has been calling every rescue he could think of asking if someone could take his birds, to no avail.

On Thursday they were scheduled for euthanasia because the only people interested in taking the emus were folks wanting to kill them for their meat or oil, and he was not willing to let that happen. He thought that it would be better for them to be put down than go somewhere they would not be loved or cared for properly. We wanted to take the emus to our place, but were warned by our vets not to because they are a mated pair and they would most likely fight with our current male emu, Yoda. And, we would never put him in that position.

When we realized, however, that no one else would take them and that it was up to us to save them. We started making calls to everyone we could think of. After hours of thought and phone calls, we finally found someone who said that they would take them in and give them a lovely home!

This past Thursday at 4:00 a.m. we drove down to Palm Springs, California to pick them up, a three-hour drive one way. Then, after picking them up, drove another five hours to their new home in Ojai, California. The two emus will keep company with some chickens and goats, and will have a loving home for the rest of their lives. The rescue took sixteen hours total on Thursday, but it was a good day’s work saving two lives! 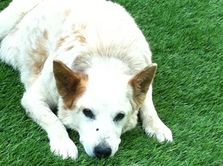 Whether it is a horse, cow or dog, our chiropractor Dr. Michael Rueben sure does make them feel better! Our dog Kaylee is 16 years old and from time to time her back gives out and it becomes difficult for her to walk. Dr. Reuben came to her rescue this week and adjusted her spine, which made her feel much, much better!

To sponsor Joy or Kaylee, please visit our Virtual Barn.

To make a donation towards their care, and to support work of The Gentle Barn please click here.