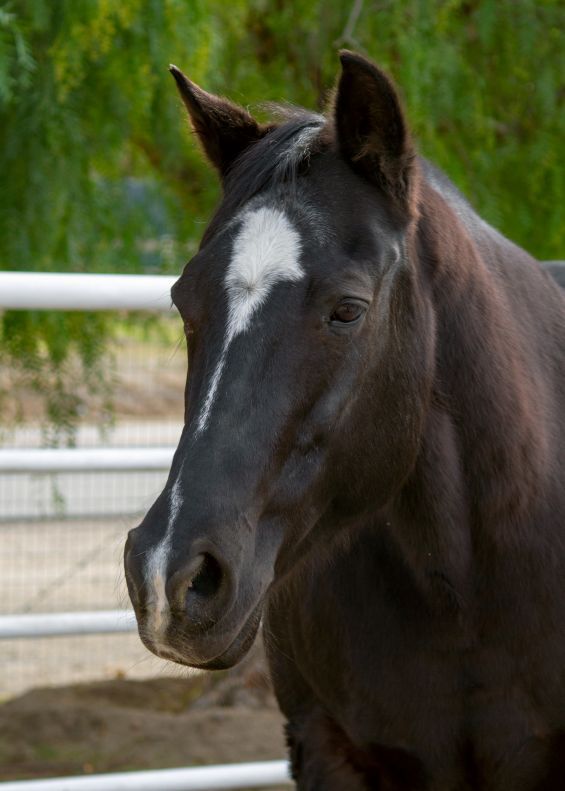 Whisper was rescued from one of the worst abuse cases in the history of The Gentle Barn. She had cigar burns on her behind, holes on either side of her from the spurs, and her skin was rubbed raw on her chest from the saddle strap. She had no confidence and was defensive, sad, and angry. It took four years to heal Whisper and help her release the anger. First, we healed her physical wounds. Second, we introduced her to our other horses until they were family and could be outside together. Then we set to work asking her to do small simple things under the saddle and when she bucked, kicked, reared, and ran around, instead of stopping her, we sat quietly on her and asked her to tell us all about it. She raged and expressed her fear and anger and we listened. The more she raged, the softer and sweeter she became until one day the anger was completely out of her body and we set her free, never to be ridden again.

Whisper retired at The Gentle Barn and became the darling of our equine matriarch, Sasha, and Sasha's mate, Caesar. Whisper later became the love of our other horse's life, Magic. Whisper was popular among the other horses and had many friends. Whisper loved but scratches, morning grooming, and bedtime cookies. In her later years, she adored her monthly acupuncture, massage therapy, sports medicine therapy, and energy healing. Even though her name was "Whisper" she was a very loud horse, knowing exactly what she wanted and didn't want and was very clear with her instructions to us. She was a diva through and through, that is one of the things we loved about her.

Whisper passed away at the age of 25, just about a month shy of her 26th birthday, when she had tumors wrapped around her small intestines. She underwent emergency surgery where the tumors were removed and 17 feet of intestines were resected. Whisper never recovered from surgery and passed away two weeks later when she began to colic again. We helped her out of her body so she would not suffer. She left easily and peacefully surrounded by her family.

She was a dive, a lover, a sweetheart, and a best friend. We will forever remember her.