Meep the chicken, living in sanctuary at The Gentle Barn California 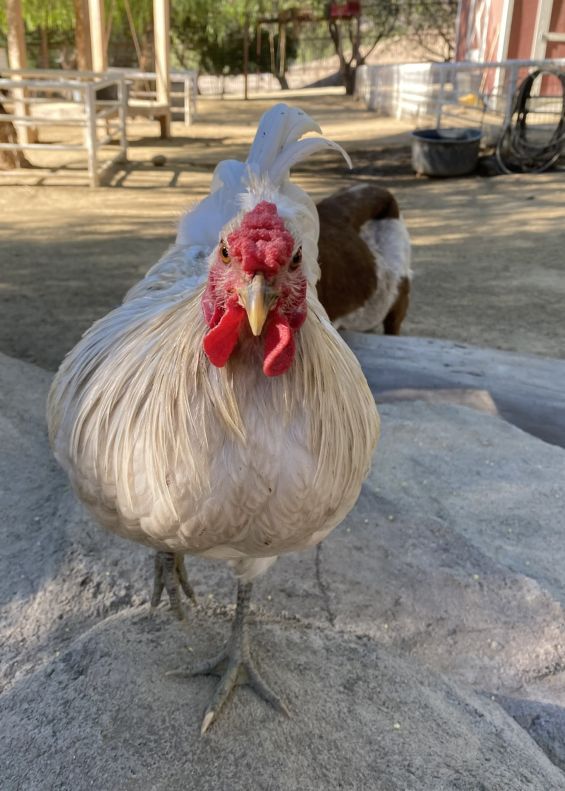 Meep the chicken, living in sanctuary at The Gentle Barn California

Meep came to us at only a day old after being attacked by a hen. We are not sure if the hen was his mom and if so, why she would do that, and if not, what happened to his mom, we just know that Meep was brought to us for safekeeping. Because he was way too young to be out in the barnyard by himself, we brought him inside to live with us and we became his family.

Meep slept under the covers in the crook of our necks all night long and followed us everywhere. He came running to us when we called him and cuddled in our laps on the couch each evening. Because we were replicating his mom, we never ever left him alone and took him everywhere we went, including driving in the car, to restaurants, and movie theaters. He hung out with the dogs, cats, and birds that live in our house with us. Meep even had a bedtime ritual where we sang to him and pet him until he fell asleep.

When Meep turned three months old he started spending time in the barnyard each day for longer and longer periods under supervision to meet the other animals. He made friends immediately and was accepted by all the others. Meep's favorite thing in the world was to jump on the backs of the sheep, goats, pigs, and llamas and ride around on them; they didn't seem to mind one bit!

When Meep was just a tiny yellow chick we were not sure if he was male or female, there is no visual way to check. We could have done a blood test but didn’t want to put him through that and we're not in a hurry to find out. At four months old it became clear that Meep is a male when he started crowing. At first, he crowed with a crackly small voice, but in time his crow got stronger and more powerful and now he fills the barnyard with his magnificent singing.

Meep is very flirtatious and will charm anyone he meets. He still hops up on the other animals and we will forever affectionately call him, “Meep who rides on Sheep”. Even though he is so big and handsome now, and has moved into the barnyard full time, he will always and forever be our baby!