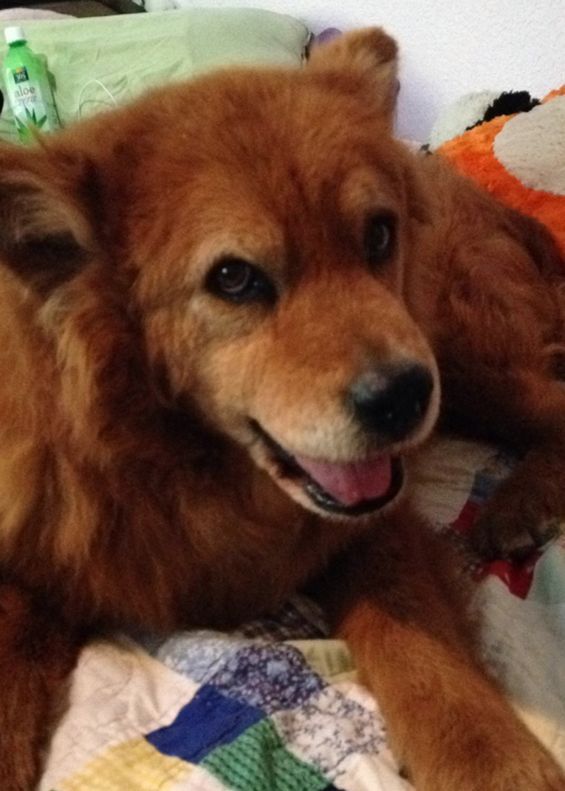 Maddie was rescued from the streets of Los Angeles where she had lived for years as a feral dog. She ate our of the garbage to survive and staid clear of humans at all cost. For years the neighborhood tried to catch her to no avail. But then there was a high speed chase and the car ran her over. She was taken to the hospital and once healed was taken to a dog rescue. But because she was feral no one would adopt her and she spent 5 months in a kennel. We found our about her and because we specialize in unadoptable animals, decided to take her home to The Gentle Barn.

For the first year it was like living with a wild animal. We put down a big bowl of food and water so she could eat when we were not there, and she followed the other dogs in and out of the dog door. It took a year to finally touch her. It took another 3 years till she stopped shaking every time someone would come over. Then we took her everywhere so she could learn new things, see new places, and meet new people.

Finally after 7 years of rehab she was a "normal" dog. She rode in the car and looked out the window without fear. She walked on leash like a little lady. She slept in bed with us and would let us hug and cuddle her. And she even hosted tours at The Gentle Barn, went to the dog park and the dog beach. It was impossible to tell that she was wild once, that she nearly bit my face off the first time i met her, and that she had never had a family or a home before.

Maddie lived till 18. In her senior years we brought her to acupuncture each week to keep her mobile and comfortable. But in the end her body just could not keep up with her beautiful spirit, and we honored her request to set her free. When we met her she had nothing, and when she left she had an entire family of people who loved her and who will never be the same again now that shes gone.